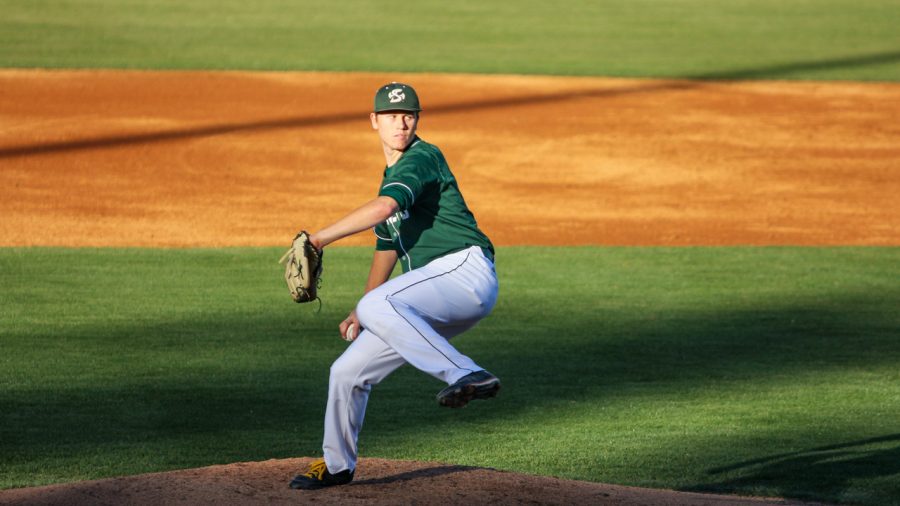 Sacramento State freshman pitcher Parker Brahms throws the ball for a strike against CSU Bakersfield on April 29 at John Smith Field. Brahms was named the Western Athletic Conference Pitcher of the Week for the period of April 17-23. (Photo by Andre Newell)

Sacramento State freshman pitcher Parker Brahms has had no problem fitting into the Hornets pitching rotation in his first year of collegiate baseball.

Following Brahms’ start against Seattle University — where he pitched six shutout innings and picked up six strikeouts on only three hits allowed — was named the Western Athletic Conference Pitcher of the Week for the period of April 17-23. In his last five starting appearances, he is 4-0 while holding a 0.82 ERA and striking out 23 batters.

“I woke up that morning and had no clue,” Brahms said about discovering his pitching honor. “People started texting me, ‘Congratulations on being the WAC Pitcher of the Week,’ and I was amazed. I was happy about my last performance.”

Brahms, a native of Topanga, California out of Calabasas High School, has worked his way into a spot on the weekend rotation in his first year with the Hornets.

After his debut against Washington State on Feb. 19, he alternated wins and losses over his next four starts, followed by a loss against Northern Colorado on March 25 where he gave up a season-high four runs in a game.

After the Northern Colorado start, Brahms’ (6-3, 2.49 ERA) run of success kicked into overdrive. Starting with a win on the road against Utah Valley on March 31, he returned home to grab a win in the second game of the series against Grand Canyon on April 8 after allowing one run over seven and two-thirds innings.

Grand Canyon and New Mexico State were both undefeated in conference play prior to facing Brahms, and were the only wins Sac State had in each of those three-game series.

“It’s about keeping a positive mindset,” Brahms said about rebounding from the Northern Colorado loss to build his three-game winning streak. “I try to forget about losses and move on to my next start. It is all mental with me, focusing on the game I’m currently in.”

Brahms’ success as freshman may be considered unique to some, but even more so considering he played primarily as a position player before his senior year of high school.

When Brahms played as a shortstop and third baseman, his high school coach Thomas Cassidy Jr. recognized his potential on the mound and the asset he could be to the team.

“We got him on the mound a bit in his junior year — the summer after is when he spent most of his time there and his development really took off,” said Cassidy, who coached Brahms for three seasons. “For a player to be performing the way he is now at the Division I level with the little amount of time he spent on the mound in high school is truly impressive.”

Brahms is the youngest of four children, with his oldest sister being 19 years his senior. His mother Christina Brahms has made the 387-mile drive from Topanga to Sacramento four times to watch him start at John Smith Field.

While she admitted the distance has been a struggle, his happiness and passion for Sac State has been present since his first visit on campus.

“After meeting with (coach Reggie Christiansen) we were in the parking lot, and Parker told me that he wanted to go back to them and tell them he (wanted) to go here,” Christina said. “As a mother I told him he needed to think about his decision first. It didn’t take him long before he called (Christiansen) and said he wanted to be a Hornet.”

Christina said she thinks about her son when she hears the song “Humble and Kind” by Tim McGraw. Those adjectives are echoed by his coaches and peers, who claim his humility is a direct contributor to his leadership skills as an athlete.

“Parker has always been a great teammate,” Cassidy Jr. said about Brahms’ years at Calabasas. “His sophomore year he was always quiet and did what he was supposed to do, but part of his maturation and development was developing a voice and being a team leader. Not just leading by example anymore, but keeping his teammates in line and bringing his team together.”

Despite his accolades, Brahms’ focus remains on playing toward the Big West Tournament and the entire team meeting its full potential.

“We know it is a day-by-day process,” Brahms said. “Our mindset is to win one game at a time, win each day.”