The State Hornet • May 11, 2017 • https://statehornet.com/2017/05/editorial-tuition-increase-shouldnt-have-to-pay-for-administrative-raises/

EDITORIAL: Tuition increase shouldn’t have to pay for administrative raises 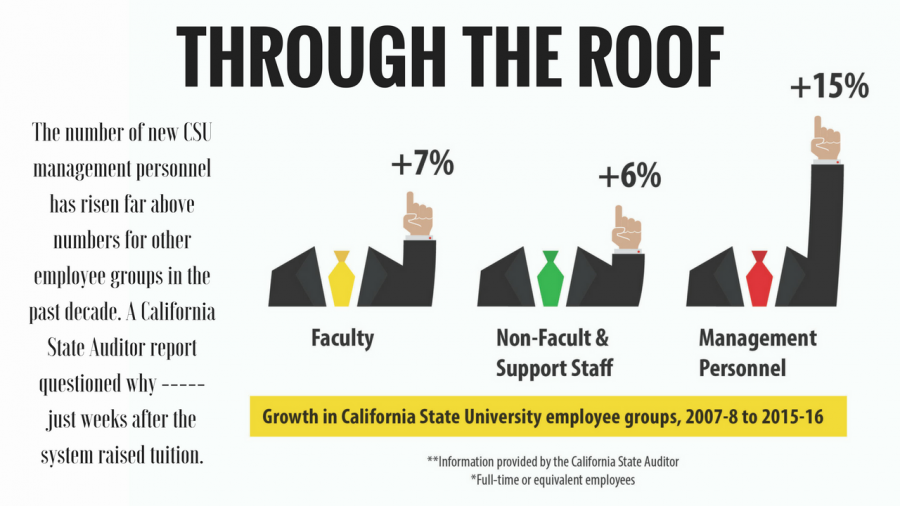 This kind of behavior shows a complete lack of shame on the part of the CSU administrators, and demands that they learn a lesson of their own on financial responsibility.

When they voted to raise tuition by $270 annually for in-state undergraduates in March, members of the CSU Board of Trustees said that a tuition increase was necessary because they needed to fill a $168 million funding shortfall between what they requested from the state and Governor Jerry Brown’s budget proposal.

Pro-increase trustees brought out Graduation Initiative 2025 as a main reason for increasing costs, saying that the money was needed to help more students earn degrees from system schools.

The tuition increase passed, but only weeks later the State Auditor released a scathing report detailing financial mismanagement throughout the system.

The auditor found that financial compensation for CSU management as a whole “significantly outpaced” raises in the salaries of other groups of employees — a situation which prevails at Sacramento State, where total management pay rose while total faculty pay declined.

Meanwhile, the six campuses visited by the auditors often could not justify the administrative glut and “one campus (Cal Poly San Luis Obispo) granted raises to management personnel that were not supported by current written performance appraisals, as required by CSU policy,” California State Auditor Elaine Howle said.

It ought to be common sense that the Board of Trustees shouldn’t ask students to bear the burden of increased tuition for the first time in six years just as the system receives a scathing report from the state about the money it already has.

As Assemblywoman Sharon Quirk-Silva, D-Fullerton, said in an interview with The State Hornet last month, colleges need to rethink what they do with the money that they have before they increase burdens on others.

“Sometimes we’ve heard about college presidents making over $350,000 per year,” Quirk-Silva said. “Are there ways to save on administration?”

But the problem of increasing tuition paying for an expanding administration is nothing new.

According to an analysis by Cal Poly Pomona professor Ralph Westfall, the number of full-time faculty positions in the CSU system rose 3.5 percent between 1975 and 2008 — but the number of administrative positions rose 221 percent and tuition went from virtually non-existent to $2,272 in the same time period.

Of course, administrative glut isn’t the only rising cost that students pay for with tuition increases. And administrators or their defenders might argue that more populous student bodies facilitate the need for the existence of these positions.

Yet although the number of CSU administrative positions rose 15 percent from 2007-08 to 2015-16, the number of total students enrolled in the system only rose by 9 percent, according to CSU statistics. Meanwhile, there are less faculty per student than there were 10 years ago, as the total number of faculty only rose by 7 percent.

We do not know how the numbers of employees in different groups have risen or fallen at Sac State specifically because, as of press time, the school has not responded to the California Public Records Act request that the university made The State Hornet file so that we could access that information.

As this school year ends, the powers that be in the CSU desperately need to rethink their priorities.

Are this many new administrative positions necessary while asking students to pay more money? Do these administrators deserve higher pay raises than the faculty who work with students day in and day out?

And unless the administrators answer those questions differently than they have been, get ready to write a fatter check to them by this fall.