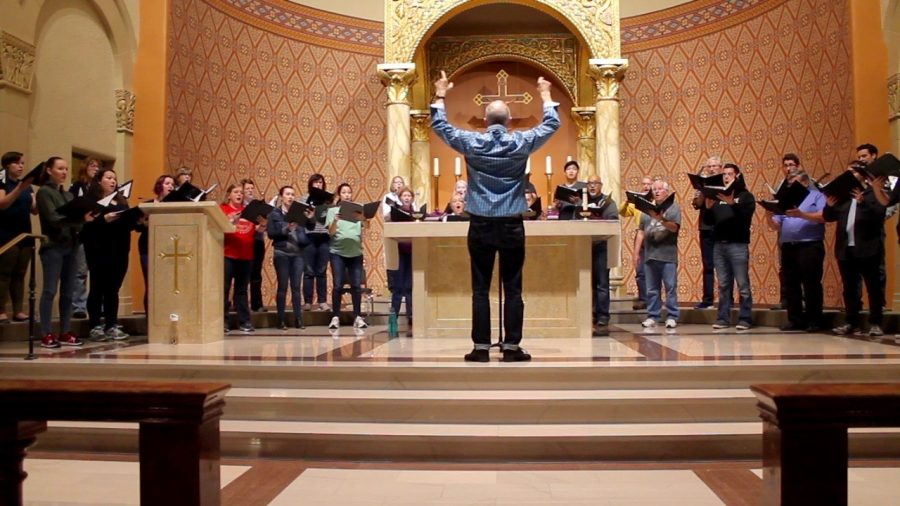 Inside a Catholic church with high stained glass windows and blue vaulted ceilings, sings a choir that is led by Sacramento State’s choir director and has twice performed for the pope.

Schola Cantorum, which mostly sings a capella and chant, belongs to Sacred Heart Church on the corner of J and 39th streets — just a few minutes drive from Sac State.

Kendrick is also the choral director at Sac State and said he helped start this choir — which performs every Sunday at Sacred Heart’s 11 a.m. mass, along with other occasional performances throughout the year — more than two decades a go.

“We wanted to bring back the richness of the church’s history musically, which lays in the 16th and 17th (centuries) — the beginnings of that beautiful music that you hear in churches like this all over Europe.”

Since its founding 25 years ago, Schola Cantorum has grown not only physically — from eight singers to around 30 — but also in stature, with several albums recorded.

Along with its stateside performances, Schola Cantorum has toured internationally in countries such as Canada, Spain and England. The choir has even shared the stage with Barry Manilow, Susan Boyle and “crossover” soprano Sarah Brightman.

But perhaps its most impressive feats occurred at the Vatican, where the choir has been twice invited to sing for the pope — not only for Francis in 2013 but also for his predecessor, Benedict XVI, in 2007.

“I wasn’t going to do it at first, because we had just been a few years before,” said Kendrick about going back to the Vatican for a second time. “(But) my choir said, ‘Don, when the (pope’s) office sends you a letter to come, you don’t say no.’ ”

Other members of the university’s campus community, such as the choral program’s accompanist Ryan Enright, are connected with the choir.

While students who are still completing their degrees at Sac State tend to join Kendrick’s outside choirs for the chance to tour and broaden their repertoire, those who have already graduated, such as current Schola Cantorum soprano Alicia McNeil, tend to seek out opportunities because they miss singing, Kendrick said.

McNeil, who received her bachelor’s degree in 2008, was never in one of Kendrick’s Sac State choirs because the choral schedule conflicted with theater arts, which was her major, although he had conducted her when she was in high school.

After spending some time performing with other organizations, travelling and earning her master’s degree in Scotland, McNeil came back to Sacramento last year, and was drawn to Schola Cantorum because of Kendrick.

“ ‘Oh my gosh, that’s the guy that directed me in high school. I remember him. I must be in his choir,’ ” McNeill recalled herself saying. “And that was that.”

Ramm-Damron said it’s not always easy balancing school and an extracurricular choir, but said that it’s worth it.

“It’s more of a treat at the end of the day,” said Ramm-Damron of being in the Sacred Heart choir, and also that he is excited about getting to tour abroad with the choir for the first time this summer in Europe.

Schola Cantorum will be headed to three cities in Germany and Prague this June to celebrate its 25th anniversary.

“We love going to Europe,” Kendrick said. “Not only (do) we experience the culture and the food and the ambiance of these beautiful places, but we see these extraordinary buildings where a lot of the music we sang by these composers was from (when) they worked in these churches.”