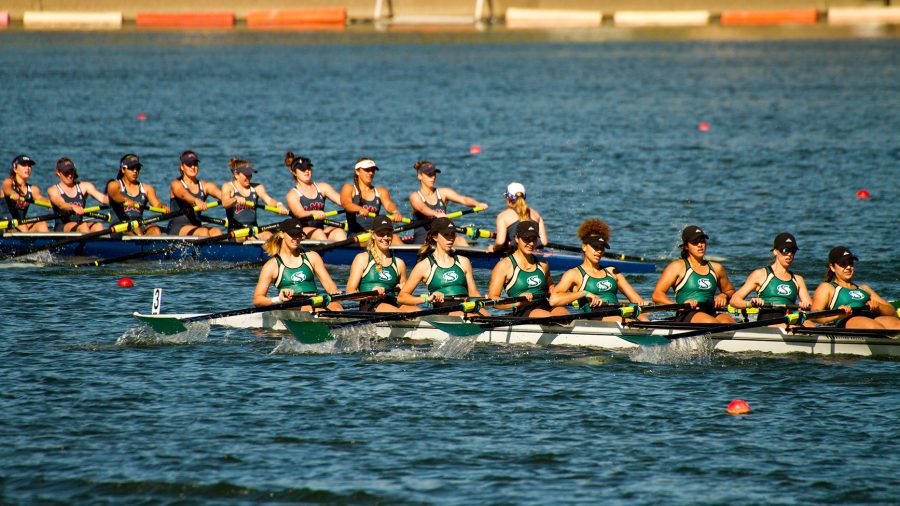 The Sacramento State rowing team competed against 30 other schools in the Western Intercollegiate Rowing Association Championships while being shorthanded Saturday and Sunday at Lake Natoma.

A total of three rowers for Sac State’s varsity eight teams were out due to injuries, forcing the Hornets to go with line up they haven’t had a lot of time with. However, the Hornets managed to place first and third in the grand finals Sunday.

“It’s kind of a scramble going into this race because we had some injuries since the last one,” Sac State coach Mike Connors said. “Some people were out, some people were sick and I think that impacted all of our boats in some way. It wasn’t great preparation — it’s not what you want.”

Of the five rowing teams entered for Sac State, four made it the second day of the grand finals. The Hornets novice eight team could not qualify for day two, but won a petite final on Saturday with a time of 7:09.94.

“I was really nervous considering I was (the) stroke seed of a boat with mostly seniors,” freshman varsity-eight rower Kristin Weinman said. “During the race, it felt right, (like) collectively we were aggressive, we were strong (and) we were wanting the same goal.”

“This weekend wasn’t a great reflection of what we’re capable of,” Connors said. “Hopefully in two weeks we’ll be a little healthier, our preparation will be a little bit better and we’ll (race) better.”

The WIRA Tournament ends Sac State’s races at home and will be the last time its 16 seniors race the Lake Natoma waters competitively.

“We ended up crying, but for a good reason,” freshman Masa Kupresanin said. “It was really emotional because (we) felt like we were together, it felt strong.”

The Hornets will next travel to Sarasota, Florida on May 13 to compete in the American Athletic Conference Championship at Nathan Benderson Park.