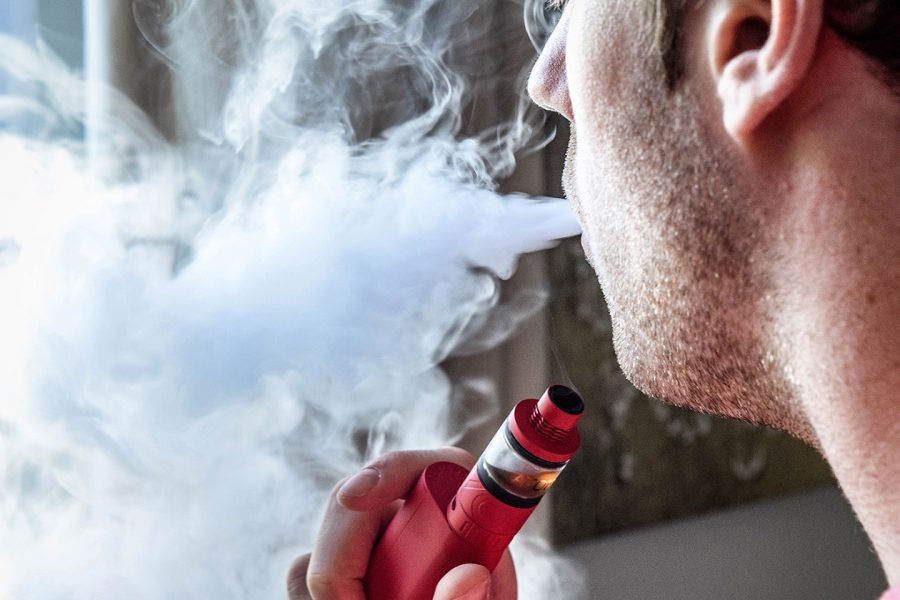 Users of electronic cigarettes should follow the same courtesies that traditional cigarette smokers are accustomed to — such as not puffing in indoor public places. (Photo courtesy of Vaping360 / Flickr)

Most laws and restrictions that prohibit traditional cigarette smoking also ban vaping, but that doesn’t stop some from thinking that they can and should be able to blow their blueberry scented water vapor in my face as I try to enjoy veal parmesan.

Cigarette smoking in most California restaurants and bars has been illegal for my entire life. Only one time have I ever seen any smoker of traditional tobacco cigarettes break that law, and the perpetrator happened to be a bartender during last call in an establishment that had about six people inside at the time.

On the other hand, I’ve lost track of how many vaping aficionados I’ve felt obliged to give a dirty look.

Laws prohibiting smoking in public enclosed spaces such as restaurants, bars, airplanes and workplaces make sense on two fronts. The first, of course, is concern over the health of nonsmokers.

Effects from exposure to secondhand tobacco smoke have killed 2.5 million nonsmoking Americans since 1965, according to the U.S. Department of Health and Human Services. For most of those years, it was perfectly legal and accepted — sometimes even encouraged — to smoke in places where it would be unthinkable today.

Nonetheless, a 2013 German study did find that vaping in an enclosed space increases the amount of nicotine, as well as chemicals linked to cancer and other diseases, in the air. Call me radical, but I’m a firm believer that people who don’t want to breathe in aluminum shouldn’t have to.

Which brings me to the second concern. Though not nearly as important as health issues, one of the problems with the indoor smoking culture that all but disappeared with traditional tobacco cigarettes in the past few decades was that it was just plainly rude to those people who did not smoke.

My grandmother had the misfortune of being sensitive to smoke while living in the “Mad Men” era. People would light up cigarettes left and right and she just had to deal with it.

Very few people — even smokers — enjoy having a plume of smoke waft over their dinner plate.

So even though your 21st century nicotine juice vapor may be more high-tech and less harmful than secondhand tobacco smoke, it is still just as rude.

And if traditional cigarette smokers have gotten the message and by-and-large try to be considerate to those around them, you should too.

As for the “vaping helps smokers quit” excuse, fine. If you want to vape instead of smoke, knock yourself out, but follow the same courtesies that you would have extended when you smoked.

It’s hard out there for a smoker in 2017 California. If my experiences with inconsiderate people in and around Sacramento are any indication, it should be a little harder for vapers, too.