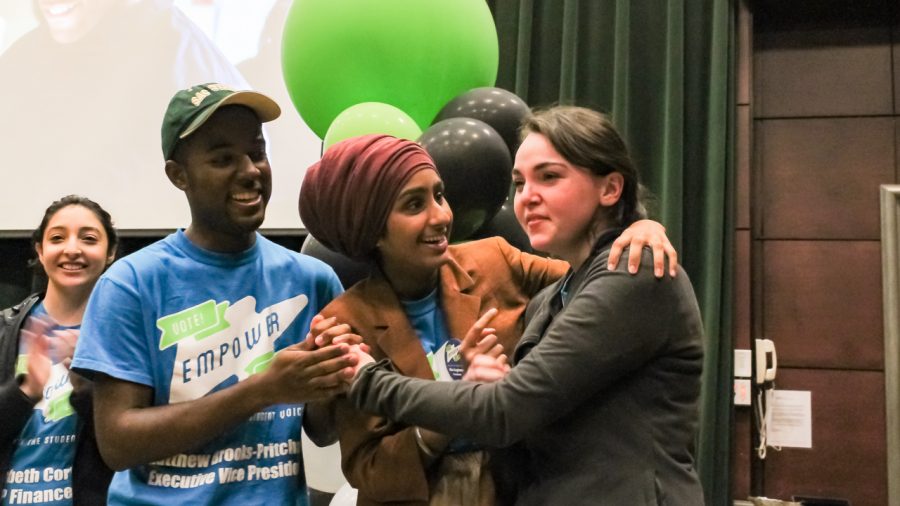 From right, Sacramento State junior Mia Kagianas embraces Karen Kaur Dhillon and Matthew Brooks-Pritchard after being revealed as the new ASI President at the ASI election results party in the Redwood Room in the University Union on Thursday, April 14. (Photo by Matt Lucas)

Empower swept the Sacramento State Associated Students elections Thursday night, with all the candidates running for the slate winning their respective races.

“All the work that we’ve done in the past two-and-half (to) three weeks, it’s all come down to this. It’s paid off and I’m just so excited,” said Director of Social Science and Interdisciplinary Studies-elect Jay Passi, who defeated two other candidates in his ASI election bid. “Bringing back the student voice, that’s our slogan and … I really mean it.”

President-elect and current Director of Business Administration Mia Kagianas teared up when she was announced as the winner but, while she described the experience of it all as “unreal,” she said she is ready for the job ahead.

“I can really push the limits. …. I can work to change culture. I can unify the campus at a much bigger level, and I think that’s what our campus needs right now,” said Kagianas. “I’m glad that I’m the one that’s going to be able to do it.”

Kagianas said that she started advocating for students when she was a freshman and appreciates being able to see her efforts come full circle.

Results were announced at the ASI Election Results Party last night in the University Union about 30 minutes after the polls closed, and while the atmosphere in the last election event of the school year was energetic — there was dancing, food, Bingo, raffles and a photobooth — the Sac State student body didn’t seem to reflect that same enthusiasm when it came to making it out to the polls, whether electronically or in-person.

Along with low voter turnout numbers, the positions of Director of Education and State Hornet Publication Board student body representative are currently vacant for the 2017-18 academic year and only three of the positions that were up for grabs — Director of Health and Human Services, Director of Social Science and Interdisciplinary Studies and President — had more than one candidate on the ballot, while those running unopposed went up against a vote of no confidence.

But Kagianas and Passi seemed to agree that their focus is on next year and getting students involved and their voices heard.

The new ASI elected officials are: