Elections for ASI Board of Directors to be held next week 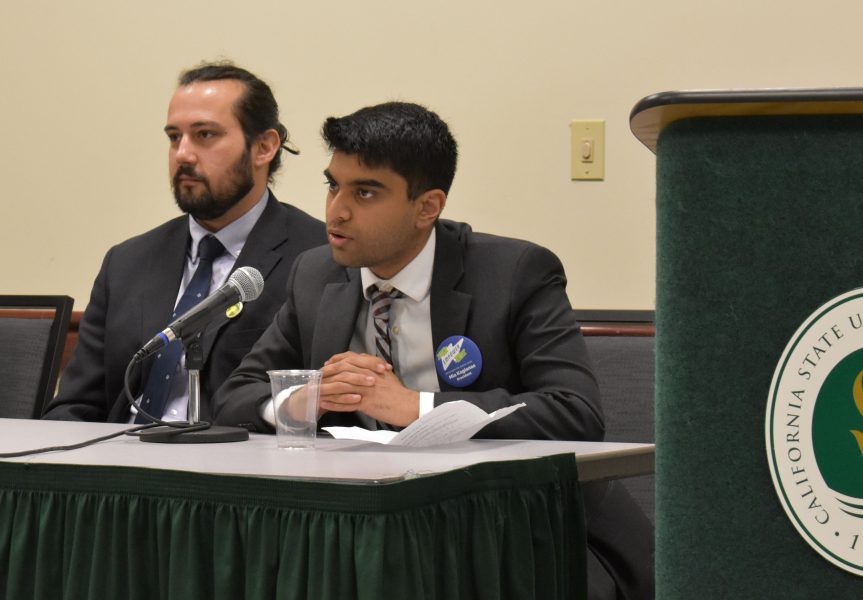 Director of Social Sciences and Interdisciplinary Studies candidates Danial McGhie, left, and Jay Passi, right, speak on campus at a Sacramento State ASI candidate forum on March 30 in the Forest Suite of the University Union. (Photo by Cassie Dickman)

Sacramento State’s Associated Students, Inc. kicked off its election season last week with candidate forums and a Coffee and Candidate event, giving students a chance to get to know the ASI hopefuls running to represent them on the Board of Directors for the 2017-18 school year

“Each new board is an opportunity to hear new and interesting ideas,” said ASI Board Associate and Chair for the Elections Planning Group Lisa Dalton. “The ASI Board has an opportunity each year to develop and implement their strategic priorities based on the feedback they receive from students and constituents.”

But out of the 14 student government positions up for grabs, only three have more than one person running — ASI President, Director of Health and Human Services, and Director of Social Sciences and Interdisciplinary Studies — with no candidate currently vying for the job of Director of Education.

However, ASI Office of Governmental Affairs Civic Engagement Coordinator Sania Kandhro said even if a candidate is running unopposed, students will have an opportunity to vote against someone getting elected, which means they should still do their research.

“If you really don’t want them, you can vote no confidence,” Kandhro said. “Then the spot will be vacant until someone else comes in.”

The lack of competition in this year’s ASI elections was not lost on Director of Business Administration candidate Jet Haresco, who vowed at a forum last Thursday to get more students involved during his tenure on the board.

Sometimes no one steps forward — Director of Arts and Letters is currently vacant — but Dalton said there is official protocol in place to help address board openings.

According to ASI bylaws, if a position is or becomes vacant, someone can be appointed with a majority vote from the board, “with the exception of the University President and the University Chief Financial Officer or their designees.”

But Dalton said ASI doesn’t leave any of its constituents behind.

“When a director position remains unfilled, other members of the board of directors make a concerted effort to reach out to those students and stakeholders,” she explained, because they do not just represent a specific college of students — they serve all students.

Just shy of a fortnight away until ballots are cast, ASI election events will continue into this week, including more forums April 3, 4 and 6 from noon to 1 p.m. in the Foothill Suite of the University Union.

Each of the days will feature a different set of candidates, who will field questions from both a moderator and the audience, and a Candidate Meet and Greet event is scheduled for April 4 in the Dining Commons from 5-7 p.m.

Students will be able to vote via www.asi.csus.edu — where people can watch previously recorded candidate forums, get information about voting and see who is running for what position — from 8 a.m. April 12 to 7:30 p.m. April 13. There will also be a polling station in the University Union from 8 a.m. to 7:30 p.m. both days.

Students should find out who is running and get a look at their pictures, so they can “hunt them down on campus and just ask your questions,” said Kandhro, who moderated two of the candidate forums last week. “I want students, as the civic engagement coordinator, to be civically engaged on campus — even (at) the local level (and) state level — because it really matters.”

RELATED: #SacStateSays: Are you going to vote in the ASI elections? Why or why not?