EDITORIAL: The hurdles of withdrawal 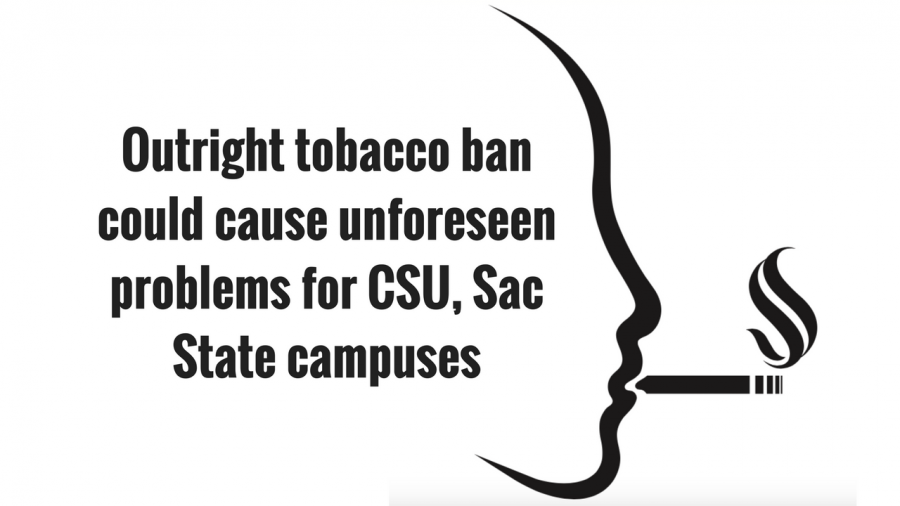 The CSU tobacco ban is well-intentioned, but a one-size-fits-all approach at Sacramento State wouldn’t take into consideration potential logistical pitfalls, such as student safety and litter directly outside the campus. (Smoking illustration by David Richards)

California State University Chancellor Timothy White issued an executive order on April 7 that will ban tobacco use on all campuses in the CSU system effective Sept. 1.

While efforts to curb smoking are certainly well-intentioned, a one-size-fits-all policy with no concessions to tobacco users is not the direction that the CSU system should take for a variety of reasons.

But there are two in particular that may prove to be problems for Sacramento State going forward: student safety and school appearance.

Regarding student safety, any school-wide tobacco ban would include campus housing, where smoking is currently allowed so long as it is not indoors, within 30 feet of the American River Courtyard, within 20 feet of other buildings and on major walkways.

Those who wish to smoke and live on campus will have to leave campus property to do so. The two closest options for these people would be the levee along the American River or across J Street.

The safety concern here is that the levee is not the safest place for someone to go at night, and the option of walking across J Street not only entails the risks of walking across one of the city’s main thoroughfares, especially at night, but also the problem that not all of State University Drive has sidewalks.
Surely, it may be nice if every CSU student quit smoking after Sept. 1. But that isn’t going to happen. So how can the CSU try and curb smoking while taking into consideration that fact?
In spite of all the medical information available, rising prices, added restrictions and increasing social pressures, a certain percentage of the population (14 percent among adults aged 18-24 in California, according to the Centers for Disease Control and Prevention) does smoke and will continue to do so, at least for the foreseeable future.

While it may not be in students’ best interest to continue smoking, it is not in the best interest of the CSU system to endanger their safety in other ways.

A second problem, less serious but worth considering, is school appearance from the outside.

When tobacco use was banned at American River College in 2016, smokers by-and-large retreated to public sidewalks immediately outside the main campus. This meant that the first sight many visitors to the campus had were plumes of tobacco smoke from dozens of smokers at a time getting their fix.

So as not to encourage smoking, no ashtray stands were set up at the campus borders, where there already weren’t any trash cans. These circumstances led to a sidewalk at the entrance of the campus littered with cigarette butts.

One-size-fits-all policies, even if well-intentioned, often lead to problems such as these because they fail to take into consideration the people affected.

Surely, it may be nice if every CSU student quit smoking after Sept. 1. But that isn’t going to happen. So how can the CSU try and curb smoking while taking into consideration that fact?

The chancellor’s office could allow the campuses to set up one or more designated smoking areas. If any were to be set up, priority No. 1 should be somewhere near campus housing.

If the chancellor remains committed to stomping out all tobacco use on campus, it would certainly not hurt to move some of the ashtray stands currently spread throughout campus to the borders so that students returning from a smoke break have no excuse to litter.

The committees charged with implementing the tobacco ban have not met, but when they do and begin to debate proposals, these two wouldn’t be a bad place to start.