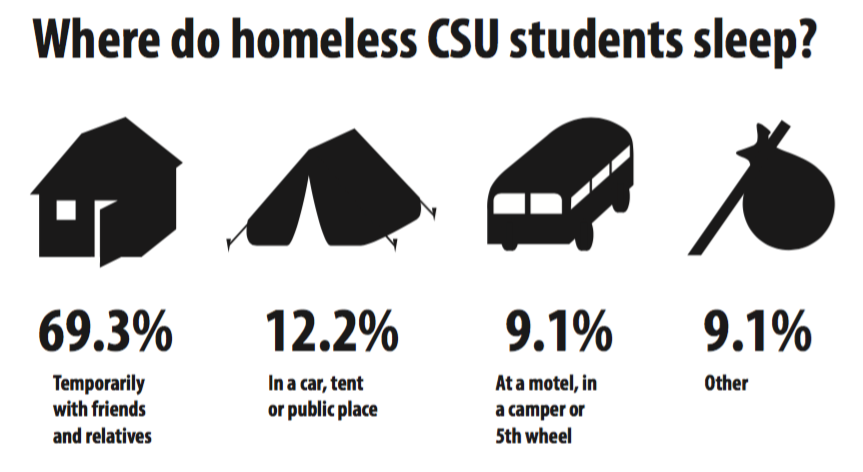 Where do homeless CSU students sleep? (Illustration by Pierce Groshosky)

Sacramento State’s recent implementation of the Student Emergency Housing Program is a good first step in dealing with an epidemic of homelessness among California State University students.

However, it is only a first step, and if the CSU really wants to take the problem seriously then administrators and lawmakers need to put a halt on tuition raises and fee hikes.

Sac State’s Student Emergency Housing Program will allow two students at a time to live in a residence hall and have a meal plan free of charge for 30 days. School officials said that they hope to expand the program to accommodate four students at a time.

There isn’t hard, explicit data available tracking the problem of student homelessness through time, but some available statistics can shed light on the scope of the issue.

According to a 2016 study commissioned by the chancellor’s office, between 8 and 12 percent of CSU students are homeless and up to a quarter are “food insecure,” which means that they do not have affordable access to nutritious food.

The problem is nationwide. According to federal data released in 2015, 58,000 students using the Free Application for Federal Student Aid (FAFSA) identified themselves as homeless — and that number may be understated. This was a rise of 2,000 from just two years earlier.

Furthermore, the number of colleges providing food banks and pantries has skyrocketed since 2008 from just four to hundreds of schools. As of 2016, 11 of the 23 CSU campuses had programs for students facing food insecurity.

Students around the country are paying not only for a higher cost of education but also for amenities aimed at improving the “college experience” at the same time as more of them are unable to stay afloat with basic expenses.

This, of course, can lead to more student debt in the future, as students experiencing homelessness often belong to the same historically disadvantaged groups whose dropout rates are higher than average.

This month, the CSU Board of Trustees is considering the first tuition hike in several years because Governor Jerry Brown’s proposed budget does not cover a $168 million gap between the system’s preliminary budget and the state’s funding plan.

Brown has said that he doesn’t want to make students the “default financers” of the state’s universities, and in all fairness he wouldn’t exactly be balancing the budget on the backs of students — he’d be balancing it on emptier stomachs and vacant beds.

Now it’s not necessarily the mission of a college to provide housing to all students regardless of ability to pay, but when faced with an apparently growing problem it certainly isn’t the mission of the CSU or the state legislature to exacerbate it and make it harder for vulnerable people to be self-reliant while investing in their futures.

If the CSU and state politicians are to be faithful to their stated missions of providing an environment that fosters education, then throwing an extra wrench into this problem is counterproductive and harmful.

RELATED: Check out what students have to say about homeless problem on college campuses.