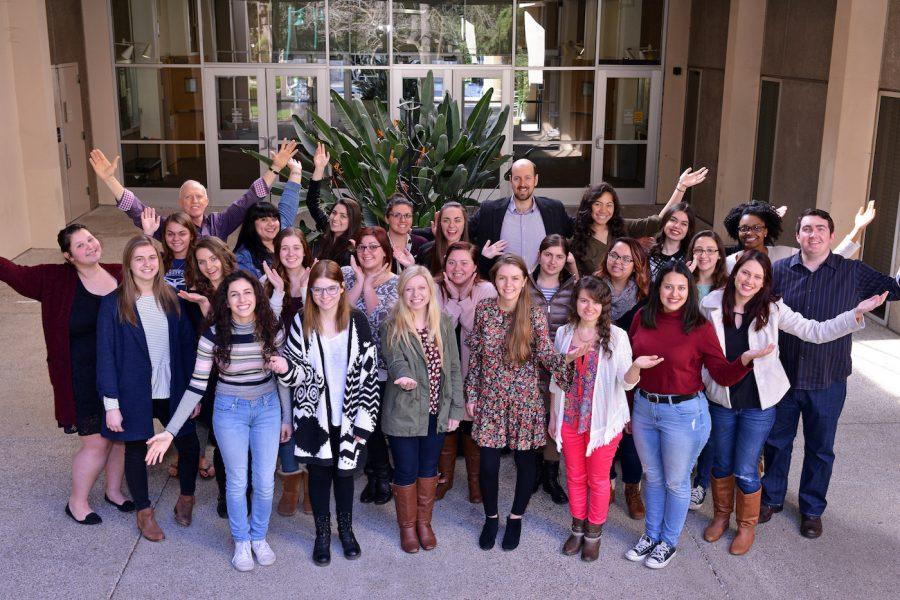 Throughout the day musical notes float through the corridors of Capistrano Hall, occasionally escaping the building’s sandy stone walls to faintly dance their way to the ears of bustling students.

This warm, sunny Thursday was no different as Choral Director Donald Kendrick prepared for his upcoming production.

Kendrick energetically swept into Capistrano room 151 with black garments in dry-cleaner bags draped over his arm, explaining that all the men and women must wear the same tux or dress for performances.

As Kendrick laid the clothes over a railing, he noted, with good humor and a bit of exasperation, some singers had yet to acquire their uniforms — even though the show is scheduled for next week.

With the performance starting at 8 p.m. on March 11, Sacramento State’s Men’s and Women’s Choirs and the University Chorus will kick off the spring semester with the first choral concert at Sacred Heart Catholic Church in East Sacramento, where Kendrick is also the music director.

Eagerly and with purpose, Kendrick bounced around the room as he described The Music Makers concert as a celebration of music’s impact and power.

The theme and name come from the Arthur O’Shaughnessy poem, he said, and it speaks to the place artists and musicians have in society.

“We are the music makers, and we are the dreamers of dreams,” said Kendrick, stopping and stretching out his arms. “We bring beauty to the world through music, especially through choral music.”

And this is reflected in the pieces chosen for his choirs to sing, he said, which all have a commonality in the way they illuminate the importance and significance of music.

The compositions normally sung are more classical, said business accounting major Sophia Palomo, who sings in the Women’s Choir, adding that this performance is going to be more contemporary and include songs from many different countries.

The performance will include music from Finland, Wales, Australia, Norway, Russia, Germany and Greece — along with works from American composers Stephen Caracciolo and Nicholas Omiccioli.

“They don’t sound like a standard choral piece would,” said vocal performance major Sarah Joy Sy, who is also a member of the Women’s Choir. “But it is exciting.”

Justin Ramm-Damron, a vocal performance major who sings in the Men’s Choir, said that the process to prepare for an event varies, but a concert like this one, which usually consists of six or seven pieces, takes about a month for memorization and individual work.

They have been preparing for this performance since the start of the semester, beginning of February, said Ramm-Damron. “It’s going to be great.”

But Jason Burke, a vocal performance voice opera major, said the most important thing a singer can do to prepare is to make sure that they’re comfortable singing in front of people and to practice it.

“Then it’s showtime — get out there and do your thing. Some people sink, some people fall and some people just rise,” said Burke. “I think we are going to do fabulous — last semester I don’t think I would have said that.”

Along with a host of other types of performances coming out of the Sac State music department, including opera and individual instrumental recitals —  dates of which can be found on the program’s website calendar — there will be one more choral concert on May 13 called Choralfest 2017.

Not only will Choralfest feature all three of the university’s choirs, but three high schools from the community are invited to participate in the annual event as well, said Kendrick.

This year the Rocklin, Bella Vista and El Camino High School Choirs have been selected to join Sac State students on the stage at Sacred Heart for the end-of-the-semester concert, which will consist of each group’s singular performance and then a one-song collaboration.

“It gives them a chance to sing with college choirs,” said Kendrick, adding that it works as a recruitment tool because it brings the graduating high school seniors to Sac State.

Tickets to The Music Makers, which will be held on Saturday, March 11 at 8 p.m. at Sacred Heart at the intersection of 39th and J streets, can be purchased in advance through the CSUS Central Ticket Office or through BASS Ticket Outlets.

Tickets can also be purchased at the door. General admission is $10, but senior tickets are $7 and student tickets are $5.
CORRECTION: March 6 at 1:13 p.m. — In the original version of this story, a paraphrase of a statement by Justin Ramm-Damron was mistakenly put into quotation marks by an editor.