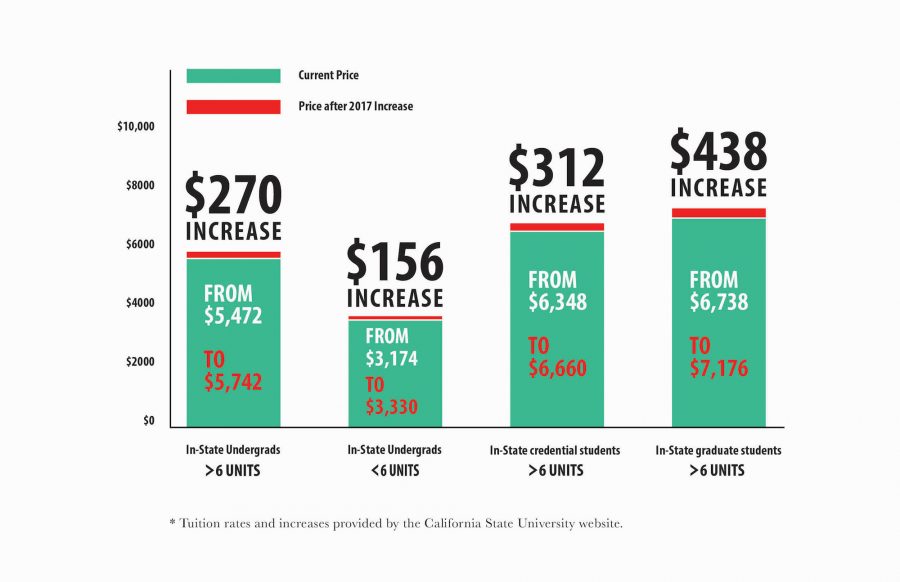 The tuition increase approved by the California State University Board of Trustees will raise annual tuition for in-state undergraduates taking more than six units by $270. (Graphic by Pierce Grohosky)

After the first tuition increase in six years was approved by the California State University Board of Trustees on March 22, student government officers at Sacramento State are considering their options going forward.

The tuition increase — one component of which is $270 more per year from in-state undergraduates — passed the board with the caveat that it would not go into effect if the state legislature decides to fully fund the $168 million shortfall between Governor Jerry Brown’s January budget proposal and the CSU’s tentative budget.

“The Board of Trustees also made clear to us that if they approved the increase and the CSU was fully funded afterward, the increase would be rescinded,” said California State Student Association liaison Travis Legault. “When Governor Brown releases what is called the ‘May revise,’ it is highly likely that it will be all around more generous than his January proposal.”

Legault said that Associated Students, Inc. members have been attending higher education subcommittee hearings and have been in contact with Assemblyman Kevin McCarty, D-Sacramento.

Ryan Brown, a Sac State student and the vice president of legislative affairs at CSSA, urged his fellow students to double down on their lobbying efforts.

“We as a student body — nearly 500,000 of us — need to spend every day from now until May telling our legislators that their failure to support students should not become our burden,” Brown said. “For every single trustee that voted in favor of the hike, I fully expect to see them lobbying alongside us in the Capitol. We intend on holding them to their word.”
“Revenues and expenses have to meet. At the end of the day, if you can’t adapt to the economic realities you are faced with, you have to close shop.” — Board of Trustees Vice Chair Adam Day
That said, Legault signaled that fighting the tuition increase was only one of several issues that ASI representatives were planning to focus on in the coming months. Other legislative items include a bill that would cap wage garnishment for student loans and a proposed bond measure for maintenance.

The tuition increase is the first for the CSU after a six year freeze and represents a 5 percent increase over the present charge of $5,472 for in-state undergrads taking more than six units. It will go into effect with the fall 2017 semester.

In addition, in-state undergraduates taking less than six units will have to pay $156 more. Non-resident students, and students in credential, graduate and doctoral programs will have to pay between $180 and $1,048 more per year.

This year, the CSU asked for $324.9 million over the previous year, according to CSU spokesperson Elizabeth Chapin. Brown’s proposed budget covered about 50 percent of that total.

According to the CSU, Brown’s budget proposal covers current compensation commitments and mandatory costs. The CSU also wants funds for infrastructure, expenses due to new students and teachers and Graduation Initiative 2025 — a plan to raise the system’s graduation rates by that year.

Board of Trustees Vice Chair Adam Day said that it was a matter of simple economics.

“Society as a whole — through our legislature — has chosen to subsidize higher education less,” he said during the March 22 meeting. “Revenues and expenses have to meet. At the end of the day, if you can’t adapt to the economic realities you are faced with, you have to close shop.”

Assembly Speaker Anthony Rendon, D-Paramount, an ex-officio member of the board, said that the idea of raising tuition was “grotesque.”

“To be fully funded two years ago and come back and say students need to pay more tuition is absurd,” Rendon said.

The vote was taken by hand, instead of by roll-call, eliciting chants of “shame” and “no justice, no peace” from students inside the hall — who had already been interrupting some speakers with chants of “the more we pay, the longer we stay.” (Story continues below)

A crowd of 80 students organized by the activist group Students for a Quality Education protested outside of the meeting.

“We’re chanting outside and the people inside the meeting can hear us,” said Courtney Yamagiwa of SQE. “Students do not support the tuition increase. We’re here and we matter.”

Sonia Reyes, a freshman who does not currently work, said that the increase would affect her if she didn’t qualify for further financial aid.

“I have to qualify for certain financial aid,” she said. “If I don’t qualify, then I’d have to pay, so either (way) I’d work during school or take out loans. My parents or family members would have to borrow money.”

Associated Students Inc. President Patrick Dorsey said in a statement the day of the vote that he was “very disappointed” and would work with the University Foundation to provide scholarships for affected students.

Legault said that ASI student government representatives are nonetheless shifting priorities toward other legislative actions, including Senate Bill 16, which would cap the wage garnishment at 15 percent weekly on private student loans.

There are two other proposals that may affect how much money students pay.

The first is Assembly Bill 393, also called the Student Protection Act, which would freeze tuition and systemwide fees at 2016 levels through 2020. It is waiting to be heard by the higher education subcommittee.

The scholarships are in the form of a proposal for the state’s budget, not as a bill itself, according to McCarty’s office.