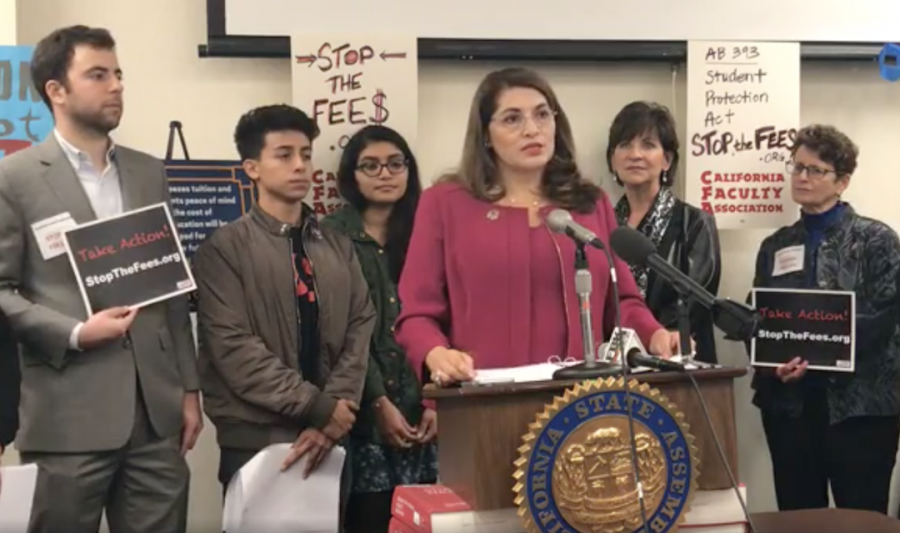 A bump on the road was placed in the possibility of a tuition increase when Assemblywoman Sharon Quirk-Silva, D-Fullerton, and the leaders of the California Faculty Association (CFA) announced the Student Protection Act on Feb. 21.

If passed, the bill would place a moratorium on increases in tuition and fees in California’s public community colleges and state universities.

The Student Protection Act would require that the amount of tuition and mandatory systemwide fees not be increased beyond the amounts that were charged as of Dec. 31, 2016, until the completion of the 2019–20 academic year.

This act was proposed not only because of a possible tuition increase of $270 on the table for the 2017-18 academic year, but also to keep the state faithful to the 1960 California Master Plan for Higher Education, which states that public higher education “shall be tuition free to all residents.”

“Our students are struggling not only to pay their rents, to be able to work, pay for food and other essentials, but also go to college,” Quirk-Silva said.

In the past 30 years, tuition has increased 932 percent. Thirty years ago CSU students would have had to work 199 hours at minimum wage to pay tuition and fees for an academic year at a CSU; in 2015, students have to work 682 hours at a minimum wage job to cover those costs.

Kevin Wehr, president of the CFA chapter and a sociology professor at Sacramento State, believes that tuition increases mean that first generation college students have trouble not only with financial needs but also with gaining “cultural capital.”

First generation college students face issues such as gaining support, knowing who to talk to about college and how to even attain money for higher education. While of course there are means such as financial aid to help students pay for school, there is still there some misleading information about how financial aid, and loans, work.

Margarita Berta-Avila, a professor of bilingual and multicultural education at Sac State and the vice president of the CFA chapter, discussed how financial issues are not translating to academic success for students and are a cause for concern for future students.

“They are working multiple jobs and dealing with more stress than they should be, yet their fees continue to rise,” Berta-Avila said. “We are asking students to pay more for less and what is interesting to me is that the disinvestment has occurred as demographics have shifted to a far more diverse student body than 30 years ago.”

Quirk-Silva and the other leaders of the CFA hope that the Student Protection Act will have an effect on the tuition increase vote that board of trustees will take in March.