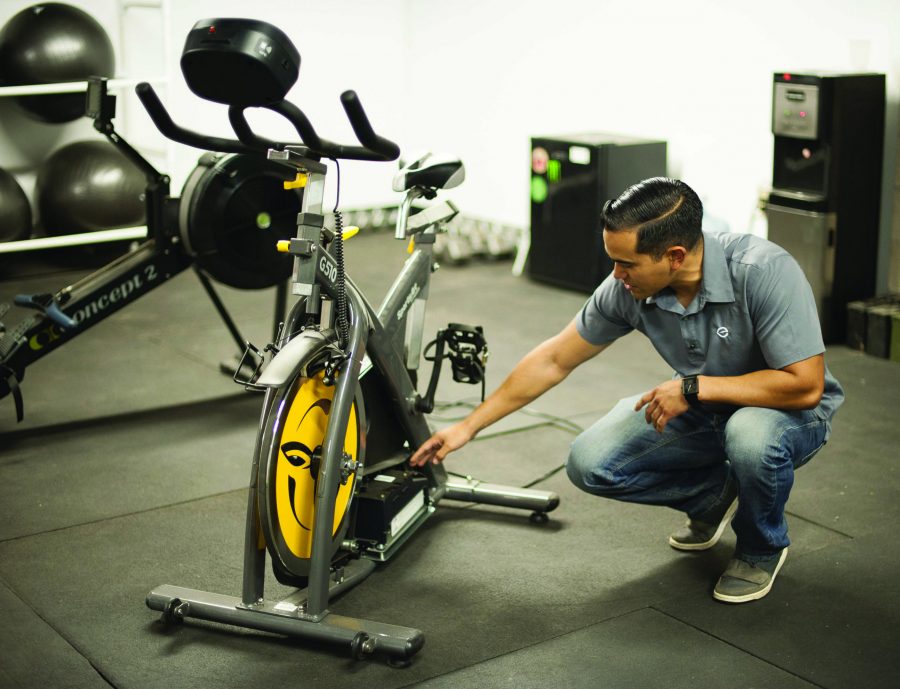 Alumnus and owner of EcoFit Jose Avina points to the inverter on the ECO_POWR cycle that has the potential to produce enough energy to power surrounding businesses on L Street. (Photo by Diana Rykun)

While running on a treadmill machine a few years back, Jose Avina, a recent Sacramento State alumnus, received an electric shock that prompted him to think of an idea to use the energy exerted to give back to the community.

“That’s where it sparked my interest,” Avina said. “Like OK, obviously we’re generating electricity, so why aren’t we harnessing this power?”

Now, Avina is the proud owner of Sacramento Eco Fitness, a gym that will power surrounding businesses with energy generated off of equipment usage.

When it officially opens for business on Dec. 19 at its 1914 L St. location, Sacramento Eco Fitness, or EcoFit, will be the first self-sustaining gym to operate in the United States.

Prior to developing his own business, Avina said he noticed that equipment like exercise bikes tend to be screwed onto the floor so that the electricity gets absorbed into the ground and not to the users.

During the many months of preparation, Avina said he traveled to Beach Fit, a gym in England that was powered entirely by its members, a concept he somewhat mirrors in his own business plan. There, he purchased 15 ECO-POWR exercise bikes from SportsArt Fitness  — the same models that were featured at Beach Fit.

Avina said EcoFit’s purpose is to produce its energy solely on the ECO-POWR bikes, as each cycle will have an inverter that captures kinetic energy before converting it into watts power that can be transferred into the facility through the power outlets.

At the moment, EcoFit is producing enough watts to reduce its electric bill by having just five staff members pedal on the bikes.

Avina said he hopes to have at least 20 bikes constantly operating three times a day to be able to produce over 600 watts of power per day. With that number, the young owner said the gym would be able to help the environment by reducing fossil fuels.

Avina is currently raising money to purchase a Tesla Powerwall battery that can be used to store extra energy generated from the ECO-POWR cycles to help power the community.

Through this method, the gym could pull energy from the battery instead of having to buy it from the Sacramento Municipal Utility District. Avina said he can also sell this extra energy to nearby businesses.

“If you look at a map of SMUD, you see so many lines running throughout the city and everything’s lit up because that’s what they supply,” Avina said. “What we’d like to do is see a dark zone on this block, because everything there would be powered by this gym.”

Avina said he hopes to implement a system where EcoFit members can reduce their monthly fees based on the energy they generate, which means the process can benefit both gym enthusiasts and the community.

Kennedy Smith, a senior communication studies major and marketing manager at EcoFit, said the gym’s concept has been well-received by the public on social media.

“People have responded really well to us,” Smith said. “They love the idea of having the cycles generating energy and giving back to the community, (as well as) helping to save our planet.”

Bootcamp workshops will be designed by Brandon Ferrante, a senior kinesiology major and lead fitness trainer at EcoFit. Ferrante has been utilizing the gym and its equipment to train his personal clients before it opens.

“What I do there is what I love to do, I love watching people go from low self-esteem to high self-esteem,” Ferrante said. “It makes me feel really good to be a part of (EcoFit) because I’m helping the planet and the individuals who live on this planet.”

In May, Avina worked at the Center for Entrepreneurship on campus where he was able to speak to the small business administration for guidance.

“It was a huge help, honestly,” Avina said. “(The center) provided a desk, a computer. All the resources I needed were available on campus and any questions I had about business or anything I could speak to a professor — it was like I was a student again.”

After graduating high school, Avina said he joined the U.S. Marine Corps. and used the money he saved from his nine years in the military to make EcoFit a reality.

Avina has set up a GoFundMe account in order to raise $15,000 for the Tesla battery and additional cycles.