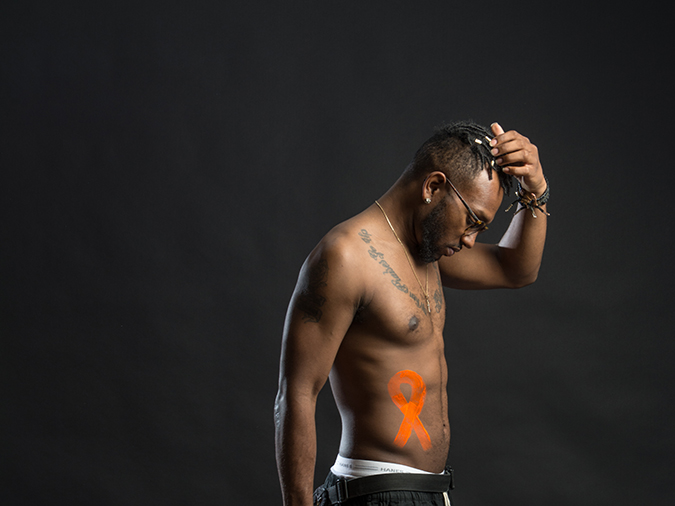 Sacramento State student Isaiah Alexander faced a difficult path when he was diagnosed with stage 4 renal medullary carcinoma, a rare and highly aggressive form of cancer which affects the kidneys and typically doesn’t present symptoms until the advanced stage. Despite the challenges presented by his illness, Alexander chose not only to stay in school, but to take on more. (Photo by Francisco Medina)

Isaiah Alexander vividly remembers the moment he was told he had incurable cancer.

It was on a Thursday during a particularly difficult week, he said.

Alexander, a 26-year-old Sac State student, had known something wasn’t right. But seeing as the high school football star was extraordinarily health-conscious, he never imagined that his symptoms were the result of a terminal illness.

When he had found blood in his urine, he worried that he had contracted an STD, but test results all came back negative. He decided to go to the doctor at the WELL, who recommended he contact his primary care provider.

Scans revealed a mass on his kidney.

His doctor informed him he had stage 4 renal medullary carcinoma, a rare and highly aggressive form of cancer which affects the kidneys and typically doesn’t present symptoms until the advanced stage.

Alexander was given two years to live.

Initially, Alexander shut it out. He found himself ignoring the reality of his illness.

“I wasn’t giving any energy to the fact that I was sick,” Alexander said. After speaking with his pastor, Alexander reconciled with his denial.

“ ‘There’s a difference between faith and denial,’ ” Alexander recalled his pastor telling him.

The treatment Alexander receives every other Friday has not been easy.

In September, a complication with his treatment left Alexander struggling to breathe due to a fluid build up in his lungs. As he struggled to maneuver the large campus, his hoverboard went from a fashion statement to a necessary crutch.

Despite the challenges presented by his illness, Alexander chose not only to stay in school, but to take on more.

Longtime friend and Sac State student Julius Wellington noted that Alexander’s refusal to slow down after the diagnosis is a testament to his drive.

“It speaks volumes. A lot of people would relax and just be with as many friends and family as possible,” Wellington said. “He doesn’t give up. It could be sports, basketball — he’s fighting till the end. Playstation, whatever. At the end of the day, it’s going to be a challenge because he’s not going to let you win.”

“He’s half the reason why I work as hard as I do, just because I know that if he can do it, then there’s no reason for anybody else to say they can’t do it,” Wellington said.

It’s not denial that keeps Alexander going — he speaks in frank terms and unemotionally about his prognosis. Rather, it’s a rejection of the idea that he should put his ambitions and goals to rest simply because of his illness.

In fact, he says, the prognosis only served to “speed (him) up.”

As a full-time student and vice president of the Black Student Union, Alexander’s schedule is far from relaxed. In addition, he spends much of his time pursuing various business ventures, including a line of fashion-forward fanny packs, which he calls “straps.” Alexander hopes to expand the brand to include luggage.

“I could choose to let this put me in a depressive state and make me think my life is over. But that’s boring. That ain’t no fun. I’m not trying to mope around, I’m trying to live. But it’s a choice.”

A GoFundMe campaign organized to raise money for Alexander to receive specialized treatment at The University of Texas MD Anderson Cancer Center in Houston has raised nearly $16,000 and has been shared over 3,000 times since it launched May 6.

Despite the grim prognosis, Alexander seems to only deal in optimism.

“Once this fight is won … I want to help other young people dealing with these serious rare cancer cases,” the page’s description reads.

Alexander says his faith has been strengthened by his illness.

“There’s no fear in me. Whatever step I take, God takes with me.”

Above all, though, the illness has changed how Alexander views the future.

“(Before), I wasn’t thinking about how right now is important. Later isn’t promised. What are we going to do right now that’s going to bring us closer to what we want?

“Today is more important than tomorrow.”