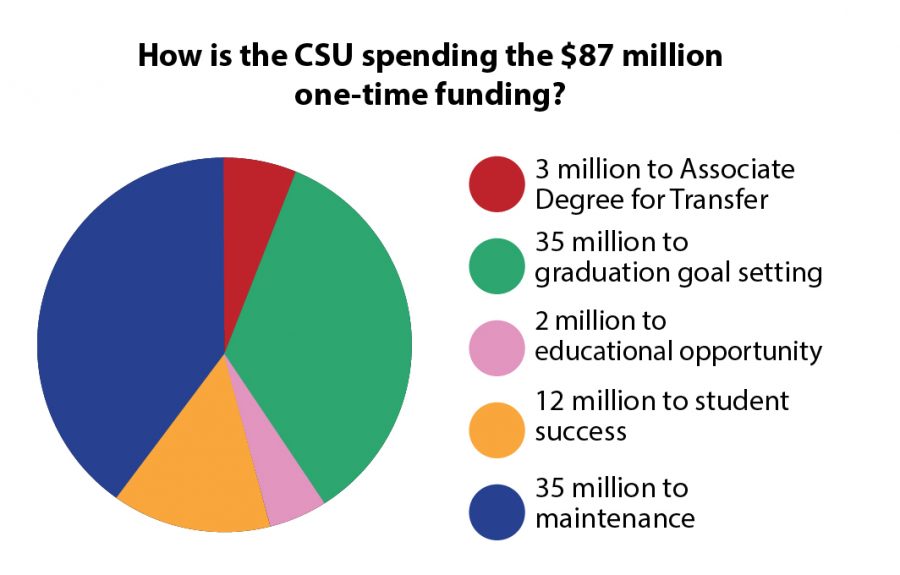 The CSU received a one-time funding amount of $87 million, $35 million of which will be spent on deferred maintenance projects, including two at Sacramento State. (Infographic by John Ferrannini)

Two maintenance projects with a total cost of $1,406,000 are underway at Sacramento State, using funds allocated to the campus as part of a one-time funding amount for the CSU system of $35 million for deferred maintenance.

The one-time funding amount for deferred maintenance is part of an overall $87 million, which comes from the Budget Act of 2016 and the Education Trailer Bill, signed by Gov. Jerry Brown in June. The funding was discussed at last month’s open forum on the 2016-17 academic year budget.

According to Victor Takahashi, the director of planning, design, and construction for Sac State facilities management, the two projects include adding a second point of entry for telecommunications on campus, with a cost of $706,000, and infrastructure updates and repairs for natural gas lines, with a cost of $700,000.

“(Consolidated Communications) serves our campus for all telecommunications (and) that comes in through the AIRC building,” Takahashi said. “So, what we’re worried about is that if somehow someone cuts the line accidentally — maybe they’re digging out there and they cut the line — we’d lose all telecoms services to the campus.”

Takahashi added that this would include all phone lines, internet services and network connections, which, depending on how long it would take to get back up and running, would potentially shut down the entire campus.

“What we’re trying to do is bring in another feed from AT&T as kind of a redundant feed into the AIRC, so in case (the current line) goes we can just switch over to the second point of entry,” he said.

In addition, facilities management is working to duplicate some of these services through the Athletics Center building, which is on the opposite side of campus, so if the AIRC were to burn down, for example, the campus wouldn’t lose those services, Takahashi said.

The project is still in the design and planning phase, but Takahashi said they are looking at completing it within a year and a half.

The second maintenance project includes replacing and repairing infrastructure for natural gas lines on campus, some of which haven’t been replaced since the campus was built, according to Takahashi.

“If we lost natural gas, we couldn’t heat the buildings,” Takahashi said. “And then also there’s problems with providing the gas for cooking and so maybe dining services might go down. We want to make sure that we repair those lines so we avoid the situation, hopefully, that if those old lines failed, we’d have to cut off the service and potentially we might have to shut down buildings and disrupt the education process.”

The two projects were chosen to be tackled first based on a long list of deferred maintenance projects put together by the facilities management team that identifies and prioritizes the most important repairs to the campus.

According to Takahashi, the list was put together after a power outage shut down the Fresno State University campus recently. The repair took longer because of outdated parts that needed to be tracked down and replaced. This prompted all 23 campuses of the CSU system to put together a prioritized list of needed repairs to try to avoid similar disruptions for students.

“With an old campus like this, we have a pretty big backlog of deferred maintenance,” said Takahashi. “Our backlog is about $200 million. So, this only makes a small dent in things. If we don’t get some funding every year, it just grows that much more because as things get older, the more things break down.”

The remainder of the $87 million will be allocated to campuses for student success, college readiness, graduation rate increase initiatives and other areas like equal employment opportunities across the CSU.

According to Norman Kwong, the interim budget officer for the budget planning and administration office and one of the two presenters at the October budget forum, it can take the chancellor’s office several months to allocate funds to each campus as it needs to take into account individual campus priorities.

At this point, the majority of this year’s one-time funding hasn’t been received by the CSU or the campuses yet, but administrators have plans for where the money will go once it is received.

“One-time funding comes from multiple places,” Kwong said. “Preferably, the state gives it to the CSU. When extra revenues appear for the state, (Gov. Brown) doesn’t necessarily want to commit them on a permanent basis because he does consider them to be a temporary thing. So, what he likes to do is just give it as a one-year thing.”

Kwong explained that one-time funding can also come from the chancellor’s office when it has leftover funds from other projects. An additional $38 million, held over from the 2015-16 academic year, will be sent to campuses this year.

“If we don’t get it from the state, then sometimes the chancellor’s office has some one-time,” Kwong said. “It could be for various reasons, but last year’s reason was they were expecting to give the faculty a two percent raise. The faculty wanted to negotiate a slightly higher raise since they hadn’t gotten raises during the recession. By the time they agreed to it, the chancellor’s office had already saved the money for the two percent, but it didn’t turn out that they got their two percent that year.”

As for Student Success, Sac State’s Academic Affairs office doesn’t have specifics on how much money it will receive, but plans are in place to expand class section offerings.

“So, any student success funding that we would receive, we would use to add courses,” said Angel Thayer, director of business operations for Academic Affairs. “In fact, we have added 380 courses (sections) this fall over last fall. We’re trying to ensure that students have all the classes that they need, and that’s really our top priority.”