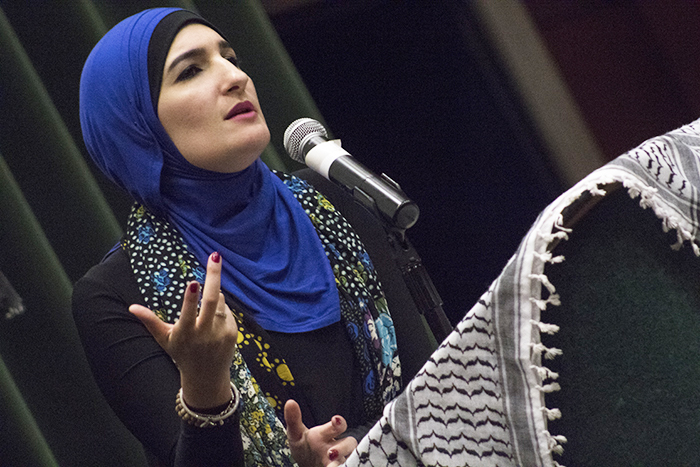 Palestinian-American activist Linda Sarsour speaks in front of an audience at a Students for Justice in Palestine event at Sacramento State. Sarsour said that minority groups have to mobilize to build a better community. (Photo by Joseph Daniels)

The Arabic greeting of peace — “Alsalam Alaikom” — sounded throughout the University Union’s Redwood Room on Friday as people gathered to listen to world-renowned speaker and Palestinian rights activist Linda Sarsour.

“Awful things are happening in our communities in the U.S; people are being killed every day. I’m sad, and I’m hurt, but I’m not intimidated, I’m not afraid,” Sarsour said. “I tell people every day that in the midst of the stories we hear, I don’t care. I am unapologetic, both as a Palestinian-American and as a Muslim-American.”

Sarsour is the executive director of the Arab American Association of New York State and the coordinator of advocacy and civic engagement for the National Network for Arab American Communities (NNAAC). She has been declared a “champion of change” by the White House.

Sarsour came to Sacramento State as part of United We Stand, a fundraiser to benefit middle eastern refugees that was put on by Students for Justice in Palestine.

“It was very eye-opening,” said attendee Ghaith Hasan. “Sarsour spoke to the concerns of the community; it was nice to hear about what is going on in this country and how we need to be active and involved.”

Sarsour spoke with intensity and passion on the topics of Islamophobia, injustices that she sees happening in the United States and how she believes they can be combatted.

Stressing the importance of sticking together as a community, Sarsour spoke about the need to combat the constructs that allow for attacks on minority groups.

“We haven’t played politics like our opposition plays politics. We are under the assumption that democracy in America is some sort of game of morality. We expect people to just do the right thing,” Sarsour said. “That is not how politics works in the United States of America.”

Sarsour explained that if minority groups banded together like lobbyists and special interest groups — by demanding standards from candidates and by financially supporting candidates who would advance their causes — then politics would become less one-sided and would reflect more diverse groups of Americans.

Sarsour herself is involved in the political process. She said that she lobbies in Washington for changes in the law and connects the victims of hate crimes to legal services.

“I am an activist born out of the ashes of 9/11 as a New Yorker,” Sarsour said. “After the attack, I was so outraged by the violations of civil liberties of our people who had nothing to do with 9/11.

“I began feeling like nobody was covering stories of Arab-Americans, Muslims (and) Palestinians, so I started using social media, writing and blogging. Then I started getting invited to speak at university campuses and Muslim communities and now I’ve been doing this for 15 years.”

Sarsour said that mutual understanding across national, ethnic and religious lines is the way to peace.

“I want to motivate the community and friends and students, and so I’m here. All we are saying is people deserve to live with dignity and respect,” Sarsour said. “I’m Palestinian and I want people to see me and say ‘Yeah, she’s cool, I like her.’ Just like I want people to see an Israeli and say ‘That’s a human being, they don’t deserve to live in fear, neither do Palestinians.’ I don’t understand why it is so complicated, but unfortunately it’s a very controversial issue.”