Festival of New American Music kicks off with medley of performers 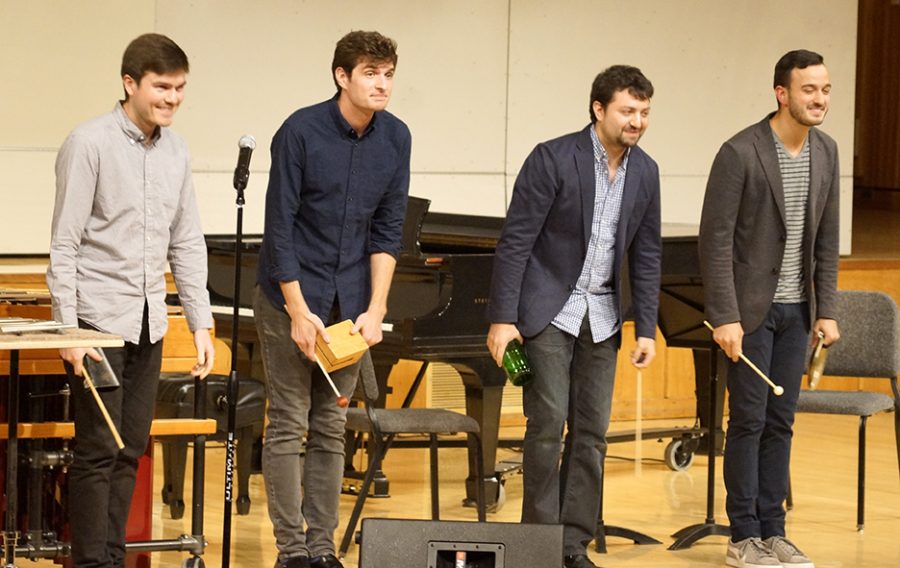 (Left to right) Jonny Allen, Terry Sweeney, Ian Rosenbaum and Victor Caccese take a bow at the end of their performance at the opening gala concert for the 39th annual Festival of New American Music in Capistrano Hall on Friday, Nov. 5. (Photo by Marivel Guzman)

The 39th annual Festival of New American Music officially kicked off with a gala concert on Friday night at Capistrano Hall, featuring appearances from music groups Sandbox Percussion and Earplay.

The festival’s co-organizer and theory composition professor Stephen Blumberg welcomed attendees and guests with a speech before the night’s lineup began hitting the stage.

Following Earplay at the concert was electric bassoonist Paul Hanson, who performed a series of compositions such as “Emerald Mile” and “Petulant Overcast.”

The closing performance of the concert was from the percussion quartet, Sandbox Percussion, hailing from Brooklyn, N.Y.

The group started its presentation with “Haiku No. 3” by Andy Akiho and ended with “Sonata,” a piece composed by member Jonny Allen.