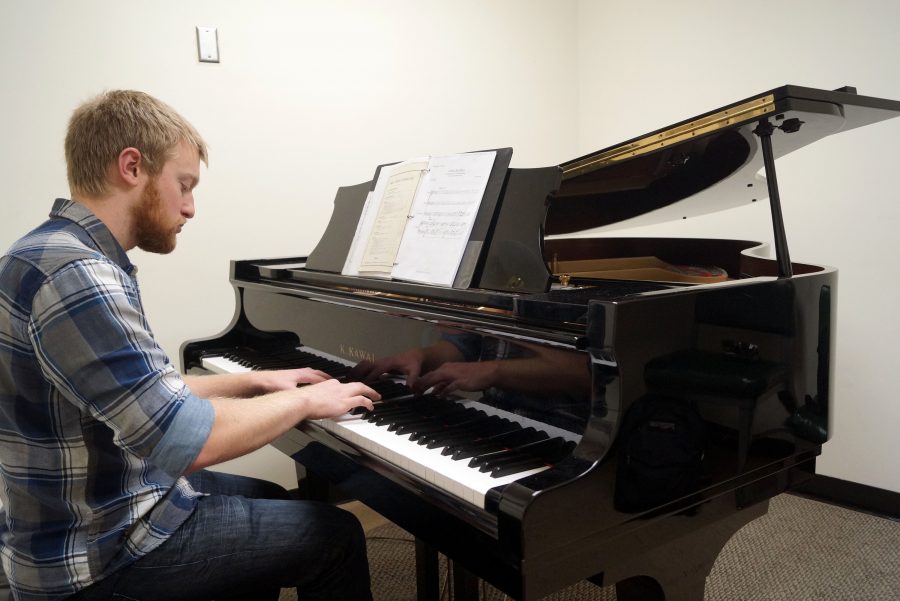 Junior music major Paul Towber, 23, rehearses his composition ‘A Red, Red Rose,’ which is inspired by a poem of Robert Burns. Towber will be conducting his piece at the "Music of Heaven and Earth" concert on Nov. 5 at the Sacred Heart Church. (Photo by Marivel Guzman)

The Sacramento State’s chorus and the university’s choir ensemble performed at the Music of Heaven and Earth concert Saturday, Nov. 5, at the Sacred Heart Church as part of the Sacramento Choral Society and Orchestra’s annual performances.

The women’s chorus opened the concert with a performance of composer Jake Runestad’s “Alleluia,” directed by theory and composition professor Donald Kendrick, director of the university’s choral activities.

In the middle of the show, theory and composition major Paul Towber performed his original composition, “A Red, Red Rose,” a piece, he said, inspired by the poem of the same name written by Scottish poet Robert Burns in 1794.

Towber’s performance was accompanied by the men’s choir, pianist Ryan Enright and cellist Jia-Mo Chen —a cello teacher at the Pacific Institute of Music Folsom.

“He is so talented, the way he worked and organized the sound, it was a big surprise,” Chen said.

James McCormick, president of the Sacramento Choral Society and Orchestra, said it is a great opportunity for Towber to conduct his piece at the concert.

“(‘A Red, Red Rose’ conduction) is his first commission (so) it is very important to built his resume,” McCormick said. “ ‘A Red, Red Rose’ was honestly a moving  piece, written by a talented young student, because he wrote it from the heart.”

Kendrick said he wishes a big success for all the students in the chorus, but he is specifically proud of Towber. At the end of the performance, Kendrick gave Towber a red rose to go with the title of his composition —a gesture, Kendrick said, Towber did not expect.

At the end of the concert, the entire ensemble of the show performed a different rendition of “Alleluia” to close out the show.

The Sacramento State choirs will perform a concert on Saturday night, Nov. 5th at 8 p.m at the Sacred Heart Church.

The concert, entitled “Music of Heaven and Earth,” will combine the men and women of the university choir for a night of international music. The event will be conducted by director of choral activities Don Kendrick.

Kendrick said the night’s performances are inspired by the light and transcendence of the heavens mixed with other styles of music by traveling to different period of time.

“Our mission is to bring beauty into an otherwise dark and ugly world,” Kendrick said. “The power of singing is something that changes people’s lives (and) beautiful music creates beautiful people.”

Prior to this, Kendrick has a connection with the Sacred Heart Church as he once conducted the Schola Cantorum, which is a local volunteer chorus.

That night will also see the premiere of “A Red, Red Rose” written by junior music major Paul Towber.

The piece is a variation of the love poem, “My Love is Like a Red, Red Rose,” by Robert Burns and was commissioned specifically for the concert to be played by the cello.

“ ‘A Red, Red Rose’ is an old Scottish poem that is all about love,” Towber said. “It can be seen as a trite poem sometimes. I have the whole men’s choir doing it —having the opportunity to conduct this piece is awesome.”

The concert will also feature works from Claudio Monteverdi, Robert Schumann, Jake Runestad, and Eric Whitacre, according to the event’s press release.