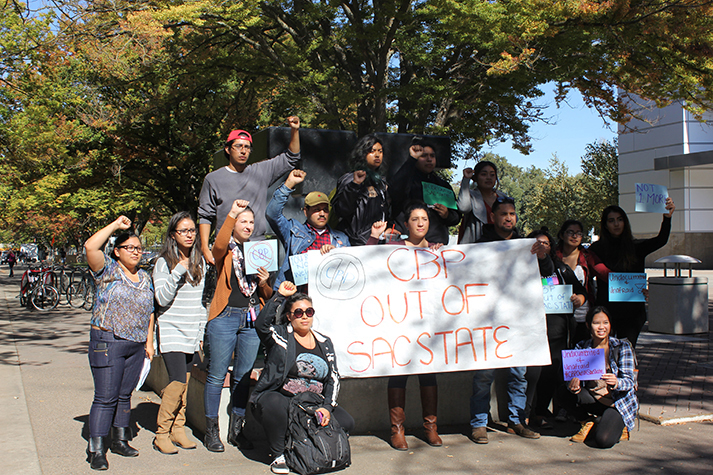 Students pose for a picture in front of the University Union on Thursday, Oct. 20, 2016 as they protest reports that US Customs and Border Protection visited Sac State (Photo by Paola Lupercio).

A group of about a dozen students protested by chanting and walking through and around the University Union on Thursday afternoon while U.S. Customs and Border Protection (CBP) members were on campus for a criminal justice career information event.

“(CBP) were invited by the American Criminal Justice Association,” said Rosa Barrientos, a student who was leading the protesters, who added that the protesters weren’t with any particular group. “Border patrol has a history of deporting immigrants; we’re tired of that.”

The group of students chanted phrases such as “no justice, no peace” and held up “CBP out of Sac State” signs.

Hector Barrios, president of the American Criminal Justice Association at Sac State, explained that CBP is not an agency that deals with deporting people, but rather is concerned with protection of the borders. He said that CBP doesn’t single out any one ethnicity and that they protect all U.S. points of entry, including the Canadian border and airports.

“The (CBP members) we have here are stationed at San Francisco Airport, so basically what they do is baggage, passports, stuff like that,” said Barrios, who was hosting the career event in the Redwood Room of the University Union. “I know the protest was mainly based because they felt disrespected. They felt their sensitivity wasn’t taken seriously. We invited (CBP) because they have a high interest with the students that want to go into that department.”

Barrios made a distinction between CBP and U.S. Immigration and Customs Enforcement (ICE), which has a primary function of deporting people who are illegally in the country, according to its official website.

Barrientos said the main concern was that students were not informed ahead of time that CBP would be on campus.

“We have 800 undocumented students here on campus,” she said. “We pay the same tuition as everybody else. We deserve safety. We deserve justice. We deserve the same thing as any other student.”

Barrios said the event wasn’t widely publicized on campus because it was intended to be for criminal justice students rather than the entire campus.

“There’s fliers and our Criminal Justice Department sent an email to every student within the department,” he said. “This is a law enforcement career fair, so that’s who our target was.”

Barrios said the student protesters were welcome to come in and speak to the event’s organizers or the border protection representatives directly.