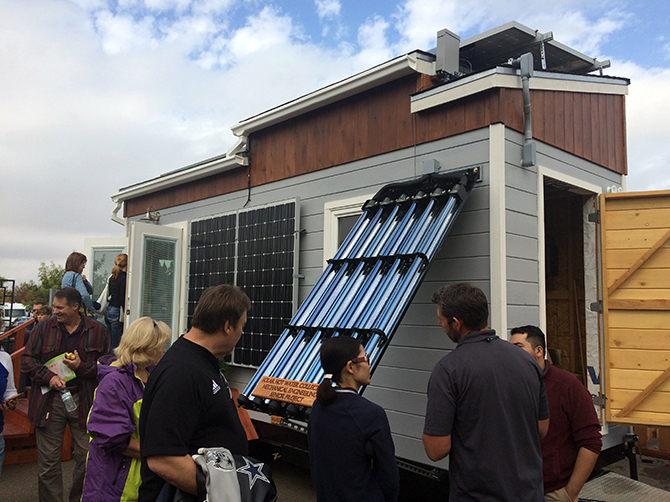 Sacramento State won the award for best bathroom on the final day of the SMUD Tiny House Competition on Oct. 15 at Cosumnes River College, where despite the looming threat of storm conditions, thousands of people filled parking lot E to tour the small living spaces.

Among the winners were Santa Clara University, which won the overall competition along with eight other awards, and the event’s hosting campus CRC, which won the SMUD Excellence Award and for best sleeping area.

“Because it was designed to have two people live in it, we wanted to have the bathroom space be the most accommodating because that’s where you spend a lot of your time,” said Rustin Vogt, a professor of mechanical engineering and the Sac State team’s adviser, who added that the Sac State house was the only one to have a full-size bathtub. “I’m incredibly proud of the students. Myself and 20 students, we built this.”

Vogt said that the tiny house took about four months to build. In addition to the full-size bathroom, it includes a bay window, French doors, high windows for a passive cooling system, full-electric solar panels, a solar thermal hot water collector, efficient LED lighting, a recycled sink and accents that were made from recycled wood.

The Tiny Houses Competition was put on by SMUD and several other groups, including Intel, the U.S. Department of Energy, the American Society of Landscape Architects and Raley’s Supermarkets — which gave out free apples and water at the event.

“We put on events just like this in order to educate the youth and our leaders of tomorrow about new, sustainable technologies,” said Daniel Gehringer, a project manager with SMUD. “We’ve been planning this for over a year. This is the first Tiny House Competition in the nation, so it was a big undertaking for a public utility.”

According to the official rules, each team was given a stipend of between $3,000 and $8,000 and was able to raise additional funds through donations and other outlets up to $25,000.

The goal of the competition was to build a tiny house on wheels, ranging from 100 to 400 square feet, as is the requirement to qualify tiny houses as a recreational vehicle (RV).

The houses had to comply with certain living standards and had to produce as much power as they use.

“The best part of this whole project was the people I worked with,” said Matt Curtis, a 2016 mechanical engineering Sac State graduate, who designed the solar water heating system for the house. “It was just amazing. Their commitment and passion, just a really amazing experience.”

The event was held from 9 a.m. to 4 p.m. and attracted over 5,000 people by noon, according to Gehringer, who acted as master of ceremonies.

The day included house tours, where the student teams answered questions and showed off their work, food trucks and several presentations on the main stage where experts discussed subjects like the popularity of tiny houses, what it’s like to live in a tiny house and how tiny houses can help the homeless.

Judges included Monica Woods, a meteorologist for ABC10, Isabelle LaRue, the creator of “Engineer Your Space,” and several architecture and energy experts, among others.

Teams were judged based on a scale of 1,000 points across all of the categories and the winner with the most points was named as the winner of the overall competition.

“There’s just been so much hard work that’s been put into this,” said J.J. Galvin, project manager for Santa Clara University’s “rEvolve House,” which takes its name from the fact that the house is on a revolving turntable in order to best utilize the sun’s position throughout the day. “Everyone is so dedicated and we’re just so happy to have this hard work be paid off.”

Attendees at the event were given a ballot to vote on their favorite tiny house in the people’s choice category. College of the Sequoias was announced the winner of the People’s Choice Award on SMUD’s website.

The tiny house built by CRC will be put up for auction with an intended sale price between $40,000 and $60,000. The money from the sale of the house will be used by students for the next tiny house competition.

The Sac State tiny house will be stored on campus at the Sustainable Technology Optimization Research Center (STORC), according to Vogt.

“It’s going to sit in STORC and be used as a research platform and then a teaching platform for a lot of energy studies,” Vogt said.

All of the teams at the event were pleased with the overwhelming outpouring of support from the community, many of them expressing how surprised they were at the number of people in attendance.

“Holy crap, so many people!” said Devin Swanick, a Sac State team member. “I didn’t realize that it was going to be this popular, especially with the rain we got yesterday. Our line has gone around the block. I was not expecting that.”

Other big winners included Laney College with five awards, U.C. Berkeley with four awards and Chico State with three awards. A full list of winners is available on the competition website.