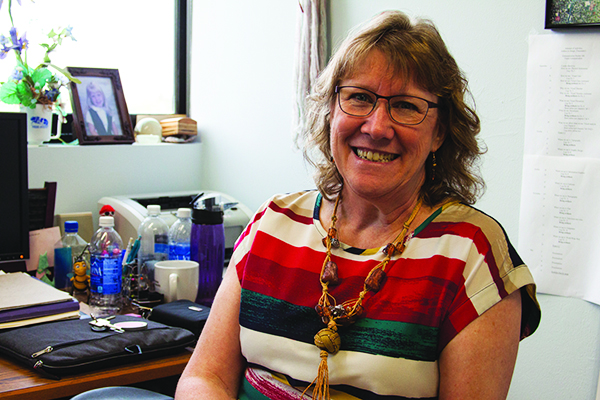 Christine Miller, a professor of communication studies at Sacramento State, is the chair of the CSU Academic Senate for the 2016-17 school year — the first chair from Sac State in a half century. (Photo by Jessica Wilson)

Christine Miller, a professor of communication studies at Sacramento State, was appointed as the chair of the CSU Academic Senate (ASCSU) and is focusing on three major issues this year: reevaluating general education requirements, protecting faculty intellectual property and integrating quantitative reasoning into more coursework.

Miller has taught at Sac State for 30 years and is the first Sac State professor to be appointed chair of the ASCSU since 1965 when John Livingston, who taught government at Sac State from 1954 until he died in 1981, headed the Senate.

The ASCSU represents faculty members across the CSU system and recommends policies to the board of trustees.

A task force was set up by the ASCSU to identify issues with students’ knowledge of quantitative reasoning and it was found that it would be helpful if students could develop these skills in a wider range of courses than what is currently offered.

“It’s not just math; It’s important to say quantitative reasoning because it’s not just, for instance, algebra,” said Miller. “The kinds of things you would do in a computer science class would be different than what you would do in a statistics class. It’s trying to sort of meet students where they are with respect to their math knowledge and skills and then build and develop those abilities, but not just in math.”

Miller has served on the ASCSU as one of three senators from Sac State for several years and has chaired several of the Senate’s committees.

Miller was awarded the Outstanding University Service Award in 2012. Before she was appointed chair of the ASCSU, she was the vice chair of the executive committee.

“It’s not an automatic ascension from vice chair to chair,” Miller said. “You have to be elected by the Senate, so it’s all of those senators from all of the campuses that decide who’s going to lead the Senate for the next year.”

The chair serves for one year and can be elected for a second. After serving, the chair becomes the immediate past chair, who then supports the next chair in transitioning into the role.

The current immediate past chair is Steven Filling, a professor of accounting and finance at CSU Stanislaus, who has not responded to a request for comment as of press time.

Miller has also been relying on Diana Guerin, a professor of child and adolescent studies at CSU Fullerton, who was the past chair prior to Filling and served as chair from 2012 to 2014.

“The idea (of the past chair) is to provide continuity, so that things don’t get lost when there’s a transition,” Guerin said. “A one-year term is really very short and you have a lot of initiatives ongoing and they’re complex. It is such a wise thing to have someone there who knows what was happening the year before and can help move that project along in spite of new leadership coming in.”

Guerin added that Miller has asked her to continue work on a project Guerin spearheaded when she was chair that focused on the importance of hiring full-time faculty.

“I’m not serving on the Senate as a senator this year but because of my extensive experience on some issues, she’s relying on me to continue that effort,” Guerin said.

Though still in the early stages, another of the three big issues being worked on this year is gathering as much information as possible about how each of the 23 CSU campuses approaches curriculum regarding general education requirements.

“We’ll see whether we can make some recommendations that might help the value of students’ degrees improve as well as improve graduation rates,” Miller said. “I don’t really think that GE stands in the way of graduation, but it can be evaluated and that’s ultimately what we’re going to be trying to do is get a better picture of GE in the system.”

Thomas Krabacher, a professor of geography at Sac State, is one of the other senators that represents Sac State and is a legislative liaison for the Senate. He was part of the election process that elected Miller.

Krabacher said that Miller was the obvious choice and essentially ran unopposed.

“She’s been a very strong presence on the statewide academic senate ever since she joined it,” Krabacher said. “She is incredibly well-informed about the major issues that have come up. And she’s got a good personality too. She feels passionate about things, but she doesn’t run over people either and not open up to their ideas.”

Another one of the issues that Miller and the Senate are tackling this year is the protection of faculty academic freedom and intellectual property. Miller explained that when professors create a class assignment or a syllabus for their class, they own it.

Many faculty members are concerned, however, because the CSU system argues that it owns that material because it was developed with resources provided to the faculty by the universities.

“In one case that I know of, the faculty member developed things for an online course and then someone else taught the course using those materials,” said Miller. “So, there are issues like that that make faculty pause and wonder whether their intellectual property is being properly protected by policy.”

Miller said the biggest challenges of her new role as chair have been the traveling and being out of the classroom. Much of her job as chair requires her to travel around to the 23 campuses in the system to be a part of meetings and to listen to concerns from faculty members, students, board members and others.

“I don’t miss the grading,” she said with a chuckle. “It’s been very odd. I haven’t been on campus for a couple of weeks and it just felt so strange. I walked by the fountain over by the Union and the fountain was going for the first time that I’d seen it in quite a while with the drought and I just thought, ‘What a nice place I work.’ I was reflecting on walking around all the other campuses that I either have or will be walking around and being proud of this place.”