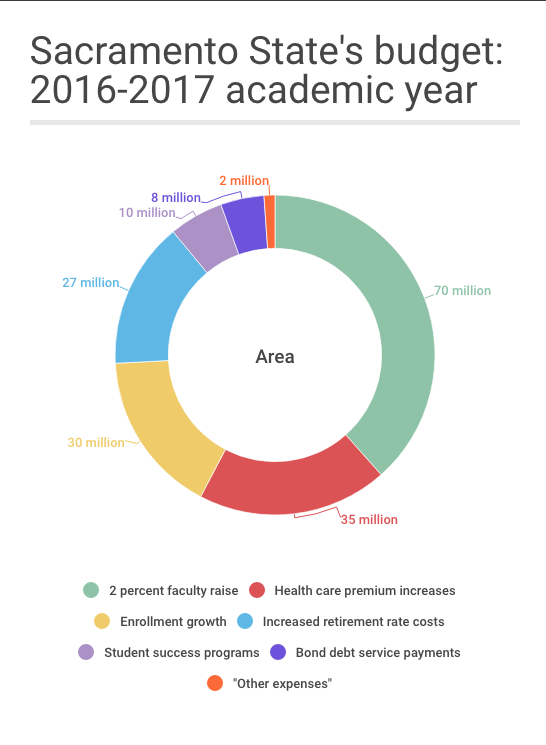 In an effort to clear up “misconceptions” about funding, the Sacramento State administration held an open forum in the University Union’s Hinde Auditorium on Oct. 7 to discuss the 2016-2017 budget and provide insight into how funds were allocated last year.

The forum, which is intended to become an annual event, was presented by Stacy Hayano, interim vice president and CFO for the division of administration and business affairs, and Norman Kwong, interim budget officer for the budget planning and administration office.

“We want to kind of clear up some misconceptions out there on how things are funded,” said Hayano.

Kwong explained that a big part of the problem with the budget is that the state’s timeline doesn’t necessarily match the timeline of when the college actually needs those funds.

Kwong continued that after the chancellor’s office sends its budget to the state, it can take up to six months to be finalized and for funds to be released to the campus.

“That kind of outlines one of the difficulties that we have in budget,” said Kwong. “We’re all guessing as to how much we’re going to have.”

For the 2016-17 academic year, state-funded budget increases include $182 million in permanent funding and $87 million in one-time funding.

For the one-time funding increase of $87 million, that money will be spread across campus maintenance, student success and grad rate increase initiatives and equal employment opportunities.

Another $38 million was given to the campus this year, which was money the chancellor’s office held over from last year’s budget, and that money will be used for faculty compensation and student success.

“When we talk about one-time funding versus permanent funding, in my mind, an allegory is almost like health food versus candy,” said Kwong. “So, permanent funding is like getting fruits and vegetables and salads. It’s good for you in the long run. One-time funding, to me, is almost like eating junk food. If you’re hungry, it’s going to do it for this year, but that’s it.”

Hayano talked about how the lack of budget increases from the state affect the general operating fund over time, but that without increasing student tuition or reducing the amount of money being set aside for state university grants, it isn’t possible to use the state money to fund things like faculty hires or benefits or for other purposes.

After the presentation was completed, the floor was opened up for questions. One woman in attendance asked if the upcoming minimum wage increases will affect the campus.

Hayano responded by saying that she thinks the increase will affect the campus’s businesses like the eateries in the University Union, for instance, but that adjustments are already being made in anticipation for the wage hike. Hayano said that’s where the unused money that each department is able to rollover from various projects comes into play.

“If the department has saved some money, they can still hire students using those funds,” she said.

The upcoming construction projects including the new science building, additional student housing and the new parking structure, were discussed and the funding for those projects was detailed.

“One of the things that we are actually concerned about this year is the wave of construction that’s coming up and whether or not students understand that the money for those construction projects do not come from the same pool of money that we use to hold extra classes,” said Kwong.

Kwong said the main purpose of holding the forum is to add transparency and allow students and campus members a chance to get their questions answered.

“It’s better to have it out there so people are on the same page about what’s going on,” Kwong said.