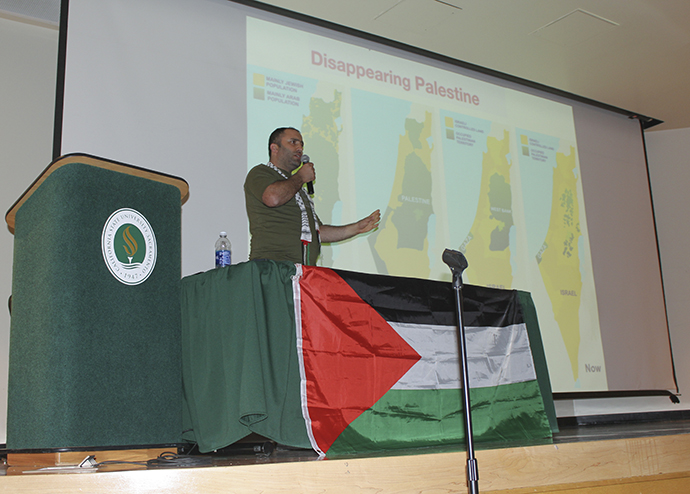 Activist Issa Amor speaks in the Hinde Auditorium at Sacramento State on Wednesday night about the what is currently occurring in the Palestinian territories. He was invited by Students for Justice in Palestine, an organization on campus. (Photo by Paola Lupercio)

Palestinian human rights advocate Issa Amro gave an audience an inside look at the current state of affairs within the Palestinian territories during an event Wednesday in the Hinde Auditorium.

Amro is internationally renowned as the founder of Youth Against Settlements, an organization belonging to the United Nations Human Rights Council seeking to end Israel’s occupation of the Palestinian territories through nonviolent action.

Amro said that he is currently facing 18 charges against him in the West Bank for participating in nonviolent demonstrations, which can result in his being sentenced to one to three years in prison.

With arrest looming over his return to his hometown of Hebron, Amro is traveling across the U.S. speaking at different events to spread awareness about Youth Against Settlements.

“It’s not about a solution right now — we need revolution first. We are still under attack. We need another movement in order to change things,” Amro said. “Revolutions start on college campuses, so use this time to find out what is going on and create change in your government.”

The Israeli-Palestinian conflict began in 1948, when the British — who had governed the tiny country on the Mediterranean Sea — intended to split the colony into two states, one Arab and one Jewish.

After Israel became an independent nation, neighboring Arab countries invaded. Israel successfully won the war but the West Bank and the Gaza Strip were occupied by Jordan and Egypt, respectively, until Israel captured them during the Six-Day War in 1967.

Since then, the territories, which are mostly populated by Palestinians, have been under the “effective control” of Israel, according to the United Nations.

In recent years, Israeli settlers have been moving into the West Bank. The settlements have been denounced by the United States and the United Nations as violations of international law.

Throughout his speech, Amro said that living as a Palestinian in the territories means having personal rights violated, being followed home and attacked by soldiers, being beaten on the street by Israeli settlers and being in constant fear.

“What is the situation there? The Israeli forces are violating international law. They are arresting children, shooting the innocent, taking their land, forcing people out of their homes, forbidding them from walking in their own streets,” Amro said. “People are dying silently in their homes and being beaten and left on the streets because an ambulance won’t even come if you are Palestinian.”

Amro spoke to the students and activists in the room and told them to be proud of what they are doing.

“Be united, protect each other,” he said. “Be stubborn, smart, flexible, think well and go on.”

“We drove down from Grass Valley when we heard Amro was going to be speaking here tonight,” said attendee Brian Fry. “We met him four years ago when we went to Palestine and we wanted to hear updates of what is going on there now.”

Aya Khalifeh, the president of Students for Justice in Palestine, said that she hopes students take the opportunity to learn more about the Israeli-Palestinian conflict.

“We hope for everyone to walk out of this event having learned something and be able to share with others the knowledge of what is happening there, so the message can be spread and people will know,” Khalifeh said.

Jose Palacios, a Sacramento State communications and Islamic studies student, said that what Amro talked about is important and opened his eyes.

“It is human rights at issue and it is important for people to know. I hope we will have more events like this and a bigger turn out because they are issues that need to be addressed and people need to know about them,” Palacios said.

“By ourselves, we can’t end the occupation,” Amro said.