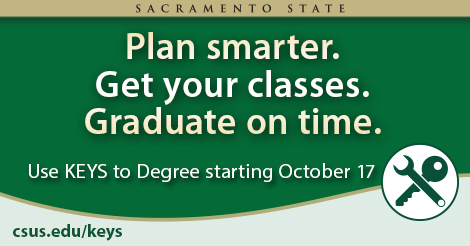 Smart Planner, a new tool in the Sacramento State Student Center unveiled by President Nelsen on Oct. 7, will soon allow students to view required coursework, plan upcoming semesters and work with academic advisers in a more streamlined process for staying on track to graduation.

Smart Planner generates a roadmap based on information provided by each academic department, which details required coursework for each student’s specific degree program and places these classes into a semester-by-semester schedule that can then be customized to fit each student’s needs.

Smart Planner will roll out in two groups of majors — one on Oct. 17 and the other in March of 2017. The first group will include approximately 70 majors — about 8-9,000 students.

“The tool is sort of complex on the backend and I think that creates simplicity on the frontend,” said Christine Miller, interim vice president for Information Resources and Technology, during a presentation at a recent faculty senate meeting. “It understands the general education requirements. It understands the prerequisites, the co-requisites and all of the ways that students can satisfy a degree requirement.”

If a student tries to plan to take a certain class prior to its prerequisite, for example, an alert will inform the student that a revision is needed. For expressed interest students — those who are planning to apply to an impacted major — Smart Planner will show the roadmap, but those students would need to meet with an adviser before making any changes in their Smart Planner.

Smart Planner is part of the new Finish in Four initiative under the KEYS to Degree (Kit to Empower Your Success) toolbox. The toolbox includes existing programs that directly connect with Smart Planner like the Sac State scheduler, transfer credit report, graduation application, academic requirements report and more.

In addition to being a student planning tool, Smart Planner, which was chosen approximately one year ago through an evaluation process of several alternative degree-planning tools, will help faculty, administrators and academic advisers collect important data on student behavior to help improve graduation rates by allowing them to gather information such as which courses and programs are in need of more sections or larger class sizes.

“I think that’s been a barrier in the past to graduation — not necessarily having that alignment between the courses students need and the courses that are offered,” Miller said. “This gives us a source of data to help make improvements.”

Miller said even though use of Smart Planner isn’t required, she thinks it will attract enough usage to create valuable data for administrators. The previous planning tool, My Planner, was used by a large number of students despite never being promoted by the administration, she said.

“I think there’s a student appetite for a tool like this and when we taught peer advisers (how to use Smart Planner), they were very engaged and immediately started plugging in their own information and trying to use the tool,” Miller said. “Just by virtue of having that outline available for all students, we at least know the major courses that are required, so we still have some data even without making it a requirement.”

Changes can be made by advisers and students in real time during advising sessions, so the hope, according to members of the project team, is that Smart Planner will help make the process more productive. Smart Planner is intended to help students plan, but the aim isn’t to replace academic advising, according to Miller.

Smart Planner can also be accessed in the same way by faculty members who want to help students make changes to their plans or suggest alternative paths.

“It’s been really awesome to see the power of the tool,” said Andrew Michaud, graduate studies director for the ASI board of directors and student representative for the Smart Planner project. “It is a very powerful tool. Students are able to grasp onto it really quickly and in my perspective, it’s going to help us really improve graduation rates because students are able to see (what they’re) looking towards in the future.”

Michaud added that because students will be able to plan out their coursework for the coming semesters with this tool, it will allow for scenarios such as a major change consideration because it would be able to display what that would entail in an easy-to-evaluate manner and help students make more informed decisions.

Professor of Sociology Todd Migliaccio, who acts as voice of the faculty for the project, said he’s looking forward to the launch of the program after having worked on it since the beginning.

All of the resources in the KEYS toolbox, including Smart Planner, are part of a larger Sac State graduation ecosystem aimed at improving time to graduation. Additional student tools are in the works including one that will launch alongside Smart Planner and help students better monitor financial aid status, according to Miller.

To find out whether your major is part of the first or second launch group, visit csus.edu/smartplanner, click on “students” and then scroll to the dropdown menu under the “When Can I Access Smart Planner?” heading and select your major.