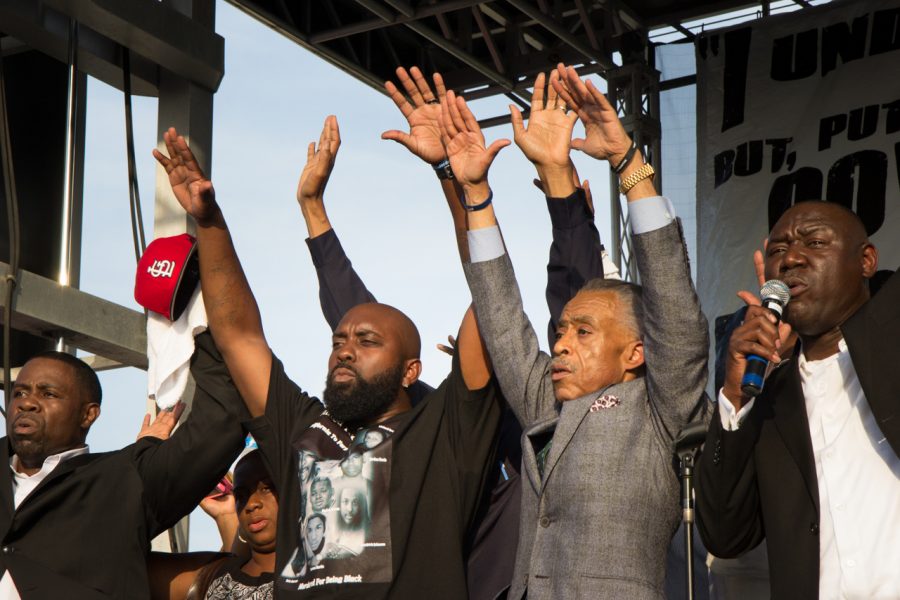 Michael Brown Sr., second from left, with Rev. Al Sharpton, second from right, as Attorney Benjamin Crump leads a call and response of "Hands up, don't shoot," at the St. Louis Peace Fest. Brown will be appearing at Sacramento State on Oct. 20. (Photo by Brett Myers/Youth Radio)

Michael Brown, Sr., whose son’s killing by a Ferguson, Missouri police officer in 2014 sparked protests and controversy nationwide, will be speaking at Sacramento State’s University Union Ballroom on Thursday at 7:30 p.m.

The event is free, though people must obtain a ticket from the UNIQUE website if they wish to enter the ballroom. Overflow viewing will be available at Serna Plaza.

According to UNIQUE, online ticket redemption is being introduced in order to alleviate problems caused by large crowds attempting to enter the Union, such as the long lines waiting for Cornel West’s lecture last month.

UNIQUE is sponsoring the event in coordination with the University Union, the Multi-Cultural Center and the Martin Luther King, Jr. Center.

Ajamu Lamumba, the adviser for UNIQUE, said that Brown — who is on a college campus speaking tour — reached out to the school over the summer.

Lamumba said that Brown will discuss issues being raised by the Black Lives Matter activist movement.

“Since the spring there have been countless lives lost, so we try to utilize our programs not only to entertain but to educate as well,” said Lamumba. “He’s going to be talking about his son’s life, what his son meant to him and the issues of the day around that issue.”

Patsy Jimenez, the program coordinator for the Multi-Cultural Center, said that the Center agreed to co-sponsor the event because it fits with its mission.

“(UNIQUE) asked us if we could be co-sponsors for the event,” she said. “We support programs that support social justice and diversity. We’ve seen a lot happen with police brutality in the black community.”

Damariyè L. Smith, the coordinator of the MLK Center, said that his group is involved in financial and logistical aspects of event planning.

“We’ve had some preliminary meetings as far as organizing ourselves for the day,” Smith said.

Brown’s son, Michael Brown, Jr., was killed by Ferguson police officer Darren Wilson on August 9, 2014 after Brown robbed a convenience store, according to a Department of Justice investigation.

Wilson shot the unarmed teenager six times, according to an autopsy.

The shooting sparked protests and unrest nationwide in August 2014 and again in November when a grand jury declined to indict Wilson.

Brown’s killing was one of the first in a series of unarmed black people killed by police officers that brought the Black Lives Matter movement to national attention.

Michael Brown, Sr., has since established a foundation in his son’s memory which focuses on “providing support to other families who have lost loved ones due to police brutality or community violence,” according to its website.

The Michael Brown Foundation has not responded to a request for comment as of press time.