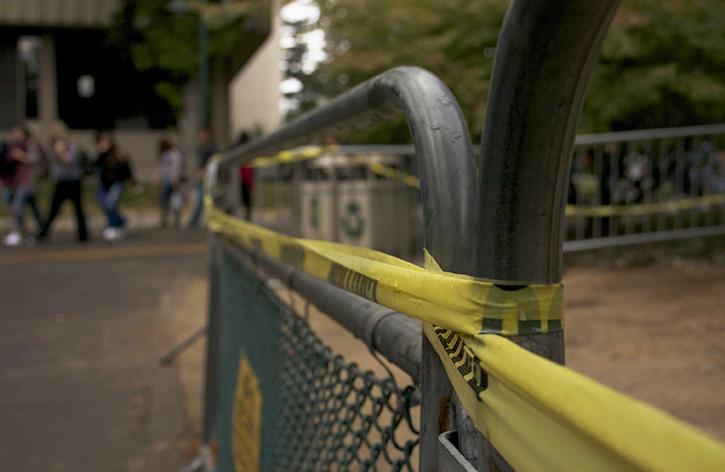 A metal fence cordons off an area south of Santa Clara Hall that initially contained asphalt contaminated with dangerous amounts of lead. The asphalt was removed Saturday and the barrier is expected to come down this week, according to Daryn Ockey, the director of facility operations for Sacramento State. (Photo by John Ferrannini)

Dangerous levels of lead dust have been removed from asphalt next to Santa Clara Hall according to Daryn Ockey, the director of facility operations for Sacramento State.

A metal fence was set up to block access to the dirt and bushes outside the south side of Santa Clara Hall on Sept. 3 after lead was found there. The fence is expected to be removed this week after the contaminated asphalt was removed on Saturday.

“(The asphalt) was disposed of by our contractor,” said Stephen Leland, the interim director of environmental health and safety. “I don’t know where exactly, but it was nonhazardous waste.”

Leland said that tests on the dirt within the barricade have shown that low levels of lead remain in the area.

“The surface samples we took all came back at very low levels,” said Leland. He added that the results showed residual levels of lead “less than the limit for an outside child play area.”

If the results of a final, precautionary test expected to be made available today show similar findings, the barrier will be removed, according to Ockey.

The 1300 wing of Santa Clara Hall was closed last month after dangerous levels of lead were found there as the school began preparations for a renovation of a machine shop there.