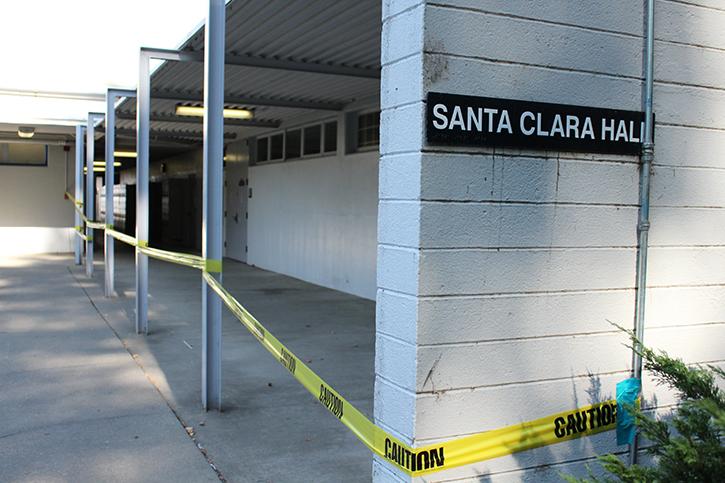 Caution tape surrounds Santa Clara Hall as abatement specialists work to remove lead dust from the building on Sunday, Aug. 28. While cleanup inside the building was nearing completion at the start of the semester, tests revealed additional contamination in the area outside the building. (Photo by Barbara Harvey)

Students returning to the Sacramento State campus may be greeted by caution tape and loud, whirring vacuums as the school rushes to remove lead dust from Santa Clara Hall after high levels of the toxic metal were detected over the summer.

High levels of lead were initially detected as campus employees prepared for the planned renovation of a machine shop in Santa Clara Hall, which houses the College of Engineering and Computer Science. The discovery triggered further testing, which revealed an elevated presence in student labs.

Forty-six students and employees had been tested for lead poisoning as of Aug. 26. None of those tested had an elevated presence of lead in their blood.

As cleanup began to wind down on Tuesday, however, further testing revealed an additional lead presence in the soil behind Santa Clara Hall. Barricades were erected along the adjacent walkway.

“The likelihood of lead exposure in Santa Clara Hall remains very low. … Out of an abundance of caution, however, and because the safety of the campus community remains paramount, all staff members and student employees who were known to have worked in the area over the course of the past few weeks also have been tested for lead,” the university had said in an earlier press release.

According to the Center for Disease Control, lead exposure frequently goes unrecognized because it “often occurs with no obvious symptoms.” In adults, those symptoms can include high blood pressure, abdominal pain, constipation, joint and muscle pain and headaches.

Steve Leland, the director of environmental health and safety at Sac State, said the lead is suspected to have originated within the tech shop—an area that was once used to make lead hammers for use in classes.

“They were actually heating up the lead, pouring it into a mold, and then they’d put the handle onto the hammer head. That would take place one or two days over the summer. And that was really it … The lead was just an accumulation over years,” Leland said.

“A lot of buildings that were built before 1978 have asbestos and lead,” said Sac State spokesperson Elisa Smith. “We just went through some remediation in the library as well—that’s back open now.”

Lower lead levels were also detected in areas of the building’s 1300 wing that had been used for welding activities.

“We tested other areas in the adjacent spaces throughout Santa Clara Hall and they were all less than what’s called the ‘release criteria’—that’s 40 micrograms per square foot. Because this is a public building, we’re held to the same levels as housing. … Where you maybe have children crawling on the floor. It’s a very, very low level; it’s very conservative,” Leland said.

As of Aug. 26, as thousands of students returned to campus for move-in day, cleanup had been completed in all but one area—putting the school’s abatement efforts one week ahead of schedule.

The school is planning to begin a series of meetings to inform students and staff.

“It’s just going to be an opportunity for students to hear about what we did, why we did it and ask questions,” Leland said.

Leland estimated that the cleanup would cost the school “in the neighborhood of $300,000.”