Hornets off to the races at Aggie Open 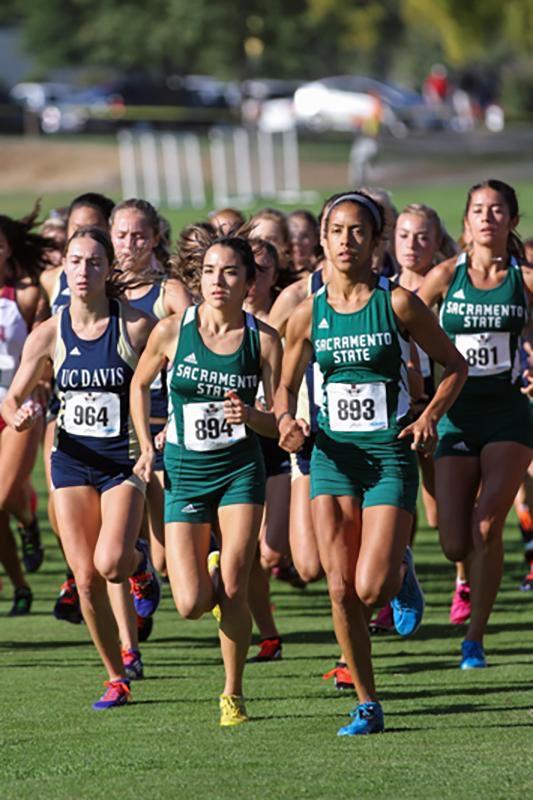 Sacramento State senior cross country runners Amanda Garcia and Chloe Berlioux take off from the starting line at the Aggie Open in Davis, California on Sept. 4, 2015. (Photo by Francisco Medina)

The Sacramento State men’s and women’s cross country teams both opened their seasons with losses to UC Davis at the annual Aggie Open on Saturday morning.

“I think that I PR’d, which is my personal best time, by eight seconds,” Scheuer said after finishing fourth in the men’s 6K race at the Putah Creek Riparian Reserve just outside of the UC Davis campus. “[Now] I want to try and break 20 full minutes for the 8K—something like 4:54 pace a mile. I think that I’m on track for it, just got to keep pushing it.”

Albano, who finished seventh in the women’s 4K, described the first race of the season as a step in the right direction for the Hornets.

“I think that Amy and I  … both pushed our limits because Davis likes to run in a pack and every move that we made they would match,” Albano said. “It was tough just trying to work with that so I think we did a pretty good job of reading them and kicked it in with all of our hearts in the last 800 and we both PR’d compared to last year so I’m really happy with that and proud of her.”

David Monk, who now has his first race under his belt as Sac State’s new cross country coach, still sees a lot of room for improvement and is eager to get his runners back into training mode next week.

“Right now with me being as new as I am we’re just trying to really establish some ground work as far as creating a culture that is going to bring out the best in these athletes and so it’s going to be a transition period,” Monk said. “The kids are working extremely hard right now and they’re doing amazing things in training so I’m just really excited about watching them improve and grow through each race they experience as the season progresses.”

Scheuer recognizes the need for improvement and notes that the team has the right mindset and coach to do so.

“His training program is definitely different from any training program that I’ve had and it’s much more tough, but I think once [we] get all the training under our belt, us a a team can actually do better than last year,” Scheuer said.

With the Aggie Open in the rear view mirror, the Hornets cross country team will next look to the Speedway Duals at the Golden Gate Park in San Francisco in  on Sept. 15.