The State Hornet • May 24, 2016 • https://statehornet.com/2016/05/bill-clinton-speaks-at-sacramento-state-to-rally-support-for-hillarys-presidential-bid/ 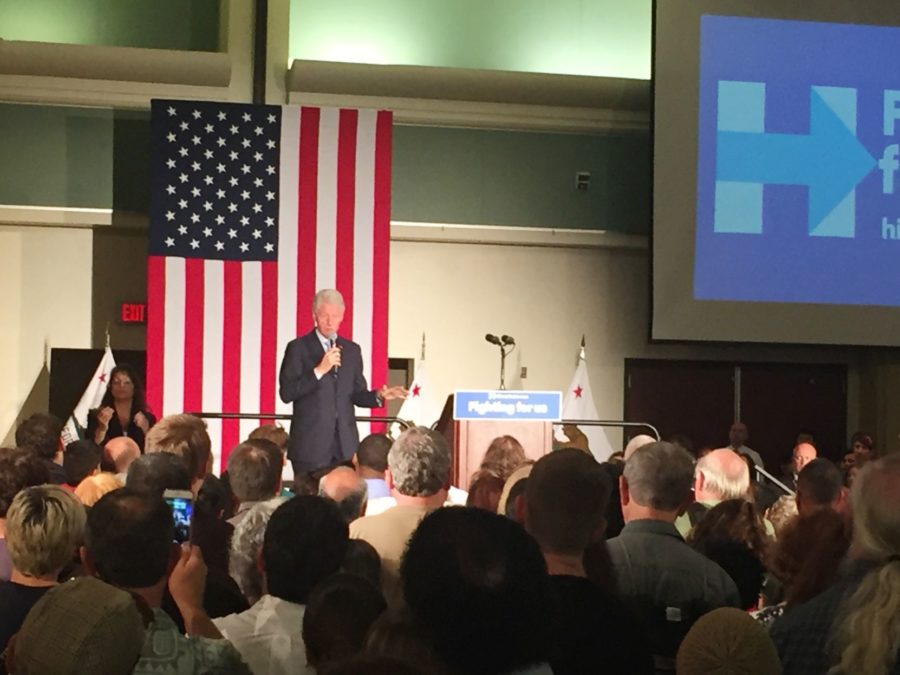 Former President Bill Clinton speaks at Sac State's University Union Ballroom to give attendees reasons why they should vote for his wife Hillary Clinton, Monday, May 23.

Former President Bill Clinton made a campaign stop at Sacramento State’s University Union Ballroom on Monday, May 23 as part of his California trip to fundraise and promote his wife’s, Secretary Hillary Clinton, presidential run.

In his 30-minute speech at the rally, Clinton gave accounts of how his wife’s experienced past as First Lady and Secretary of State would be helpful if she became the next president of the United States.

“A college loan is the only loan in the United States you cannot refinance when the interest rates go down, and that is wrong,” the former president said.

He also said that as much progress as the U.S. has made with LGBT reforms, “you can get married on Friday and fired on Monday.”

When he mentioned the presumptive Republican Presidential nominee, Donald Trump, the crowd’s boos and hisses grew so loud that most of what Clinton said became inaudible.

Clinton made a different stop in Stockton, California before arriving at the Sac State campus. Afterward, he attended a private fundraising event at the Land Park home of former state Treasurer Phil Angelides.

According to the Sacramento Bee, Bill Clinton was 90 minutes late to the Sac State event due to an unscheduled meeting with California Governor Jerry Brown.

The Monday event was open to the public and organized by the Hillary for America campaign and the Sac State College Democrats organization.

Tim Sullivan, president of Sac State College Democrats, said the campaign approached his organization to host the event on Thursday.

“We acted as a go-between between event services and the campaign and just facilitating and help streamline the process,” Sullivan said. “Working with a campus organization makes putting on an event like this much easier for an outside party.”

In attendance at the event at Sac State were special guest speakers hailing from around California and hundreds of other Hillary Clinton supporters who came with hats, buttons, and signs to show support for the candidate.

The list of guests who spoke before former President Clinton to rally up the crowd were: Assemblyman of District 30, Luis Alejo; Senator Isadore Hall III; Senator Kevin De Leon; and Jordan Hunter, a high school senior from Jesuit High School, who said he will cast his first vote as a registered voter for Hillary Clinton.

The line of attendees waiting to get into the ballroom stretched from the check-in counter to the outside of the University Union building.

Some attendees were in line for three hours to get in to the Union Ballroom to see the former president speak in-person.

“It was really cool to have … the former president come to Sac State instead of like UC Davis, and be right here in our backyard,” said Sac State alumna Paris Ryan who, despite showing enthusiasm for seeing a former president, also wished the event could have been better organized.

Fely Sita-Makaba, a volunteer for the Hillary for America campaign and a Sac State alumna, said she found out about the event the day before but was still excited to show up to shake hands with the former President.

“My boyfriend met [former President Bill Clinton] and shook his hand before and I was like one day, I’ll get to do that too,” Sita-Makaba said. “And I did today. Twice, and I have selfie pictures to prove.”

Sheri Jennings, who graduated from Sac State in the 80’s, echoed the former president’s call-to-action by saying that she wants to see Secretary Hillary Clinton in the White House as president.

“We’re too whiney,” Jennings said. “We’re not doing what we’re supposed to be doing. I want people to go out there and vote.”

The last day to register to vote in the primary was Monday, May 23. The California Presidential Primary Election will be on Tuesday, June 7.