The Big Sky goes all in on Reno 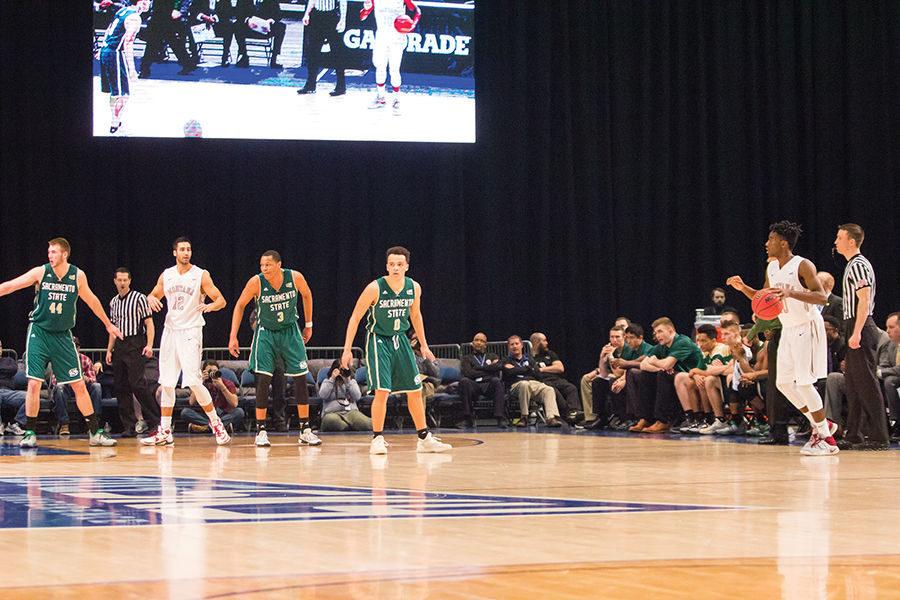 The Big Sky Conference changed its conference basketball tournament to a new format that could be a major new revenue source for Sacramento State’s athletics department and make going to the games easier for fans.

The new format, which began this past season, brings all 12 teams in the Big Sky Conference for both men’s and women’s basketball to a neutral location, at the Reno Events Center in Reno, Nevada. The top four teams with the best regular season records receive first round byes. The winner of the tournament gets an automatic bid to play in the NCAA tournament.

Under the old format the top eight teams, depending on tiebreakers, were the only teams to make the tournament. The team with the best record at the end of the regular season was given the top seed and was the host team.

Big Sky Conference Senior Associate and Deputy Commissioner Ron Loghry said the new format was a success in its first season in use and thinks it will continue to grow.

“We are very excited about the tournament and possible fan additions for next season,” Loghry said.

Loghry said this year’s tournament will end up losing some some money overall, but that the long term financial outlook is promising.

“Next season we are looking for more ticket sales and an increase in corporate sponsors,” Loghry said.

This season, the tournament was primarily sponsored by the Sliver Legacy-El Dorado-Circus Circus hotel trio.

“The Reno-Sparks Convention and Visitors Bureau paid for the rent of the facility which includes the staffing for setup, ushers, security, concessions, etc.,” Loghry said. “It also paid for the score table personnel, the video company, the music, practice facility rental, student athlete gifts, volunteer and ball-boy attire, and all catered food (media, VIP, staff). The teams were responsible for the cost of travel, their hotel rooms, and food.”

This offset a lot of the costs teams used to have chip in for.

“We couldn’t pay for a [tournament] had Reno not stepped in,” Loghry said.

Though the Big Sky Conference will lose money on the tournament this season, and ultimately owe Reno the difference, Loghry expects next season to generate enough revenue to pay back that debt and still leave a good amount of money for the teams to split. Loghry also expects the fan experience to be even better next season than it was this season.

“We are looking into a possible fan-fest during the tournament week,” Loghry said.

Adding to the fan experience will help increase revenue from ticket sales, which Loghry thinks teams will see a boost in next season. Sac State Director of Athletics Bill Macriss said adding to other entertainment options available in the area, such as skiing, golfing, gambling and more, will only make the tournament better.

The old format created havoc for teams and administrators as it left them with extremely short windows to plan travel for players, coaches and trainers.

Macriss said last season was extremely expensive for the Hornet athletic department because the men’s tournament host was not decided until the final regular season game.

Going into the final Saturday of regular season play last year, there was a possibility of three different teams being the number one seed and hosting the tournament, including Sac State. This left teams and fans alike in a holding pattern until the games were completed.

“We found out the last day possible. We ended up going to Missoula. We found out late on a Saturday night,” Macriss said.

Macriss said the logistics of transporting everyone at a moment’s notice was a nightmare, financially.

“Getting just the team up there, with coaches and a trainer and radio, cost us [around] $40,000 because you have to turn around and try to book flights into Missoula, Montana on a Sunday, traveling Tuesday to get there to play Wednesday,” Macriss said.

The total cost for the Sac State athletic department to send only the men’s basketball team to Missoula during the 2014-15 season was $39,850.90, according to Sac State’s business office and Macriss. For the 2015-16 season, it cost the athletic department only $21,362 to send the men’s basketball team for the entire week. Macriss said with over $18,000 freed up, Sac State could afford to send the cheer team and band to Reno for both games as well.

Macriss also said the fan experience was lacking under the old format.

“It just didn’t make any sense, other than for the home team who was already there,” Katz said. “It was just bad for everybody. It was just bad. We fought the commissioner over it for years and years. This is my eighth year. From my very first year on, we were trying to get this thing fixed.”

One problem with booking flights on the last possible days is the lack of seats available on planes. It is especially difficult when you have a lot of people attempting to travel at the same time to the same location, in this case Missoula, Montana, that generally does not garner much traffic and limited space is available.

“Some teams had to have players on different flights,” Katz said.

Having players on different flights increased the overall cost of traveling. Katz mentioned that Sac State got all of its players on the same flight at the last possible second.

Both Macriss and Katz said the old format didn’t allow fans to feel pride in the conference and for teams to create rivalries in the tournament. Both agreed the new format will give Sac State fans a chance to show up and cheer on their team. Macriss said a Montana newspaper reporter told him he was impressed by the turnout from Hornet fans at this season’s tournament.