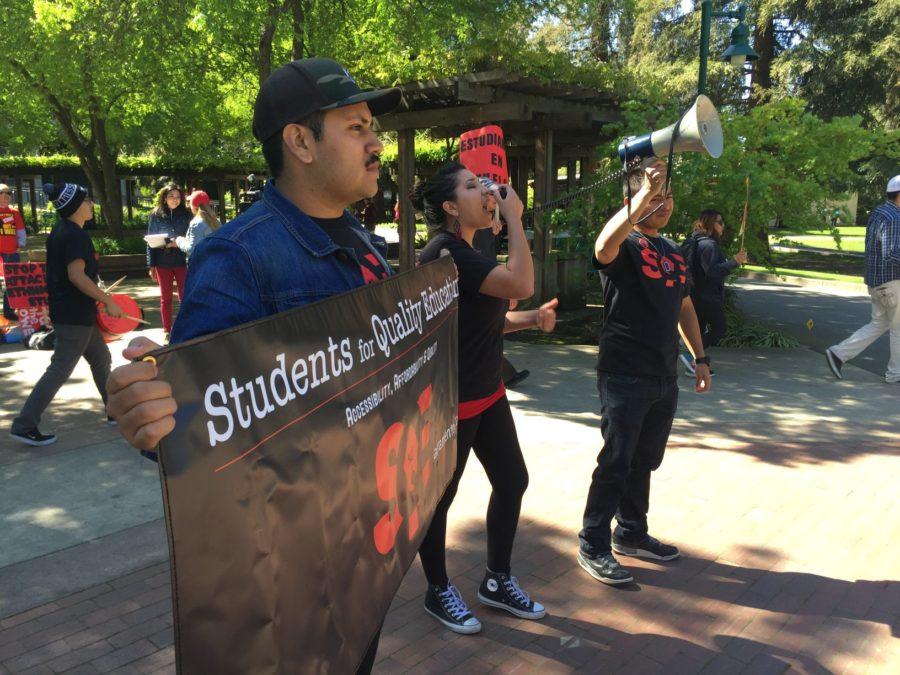 Members of Students for Quality Education protesting at Sac State with a megaphone after the California Faculty Association's announcement regarding the looming strike and pay dispute with the CSU, Monday, March 28.

A group of approximately 20 students and a handful of faculty created a picketing circle in the Free Speech Area of the Library Quad on Monday. The individuals marched holding signs that read, “Educate the State” and ” Students Support Faculty.”

Senior history major Jamier Sale said this demonstration is to show that students stand with the faculty on campus.

“Faculty deserve more, but they are settling for the five percent,” Sale said.

In support of the faculty, students are voicing their opposition to the “Sustainability Financial Model,” as the CSU calls it, which calls for raising student fees versus cutting spending on high figured salaries, Sale said.

“They need to cut from the top not the bottom,” Sale said. “We are against cuts to aspects that affect education; because, students are leaving with lots of debt.”

A female student leading the chanting over a megaphone said students were set to protest in the quad for as long as it took for a changes to be made. At 12:40 P.M. the quad emptied out as the participants headed back to the California Faculty Association office on campus.

The protest and conversation comes in light of a fact finding report released by the CSU System Monday morning.

The statement released by the CSU System states that “over the last two years alone, the CSU has invested $121.6 million in compensation increases for faculty” along with other information.

President Robert Nelson made contact with the student protestors outside of Sacramento Hall earlier in the day.

Nelson said he is happy to hear what the students have to say and hopes that a fair solution is found soon.

[email protected]: I hope that we can come to a fair and equitable solution. @calstate #cfastrike #CSUstrike

Keep following The State Hornet’s coverage for more information on the CFA and CSU negotiations.

Below is video footage from the protest, taken by State Hornet reporter Vu Chau.