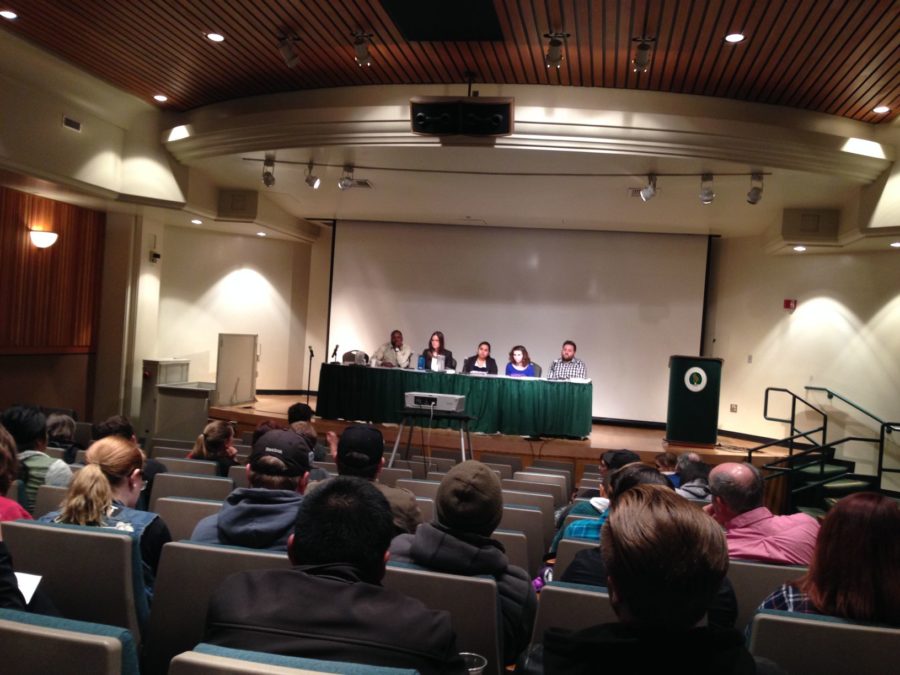 The "An Indigenous Peoples' History of the United States" student panel on Wednesday, March 9 in the University Union Hinde Auditorium.Photo Credit: Christopher Castenada

Last fall Chiitaanibah Johnson, a sophomore history major of Navaho descent at Sacramento State, got into an argument with an adjunct professor because she believed the word “genocide” was a proper term to describe the atrocities inflicted on the Native indigenous tribes in early American history, while the professor disagreed.

This incident, which received national news attention, brought the history department into the controversial discussion on the holes in American history standards taught in schools and brought about the discussion of this event.

Historian Roxanne Dunbar-Ortiz, author of “An Indigenous Peoples’ History of the United States,” was invited to speak at a student panel on Wednesday, March 9, in the Hinde Auditorium organized by Aaron Cohen, professor and chair of the history department. Dunbar-Ortiz presented her research, supporting Johnson’s argument that the word “genocide” being an appropriate description of the treatment of Native Americans in early American history. She talked about the resistance in professional historical communities to use the word “genocide.”

“It was a wake-up call,” Dunbar-Ortiz said.

A student challenging the terminology of a professor on a marginalized historical event was, in Dunbar-Ortiz’s opinion, a much-needed self evaluation.

Using recorded American historical events as evidence and The Convention on the Prevention and Punishment of the Crime of Genocide definition of genocide, Dunbar-Ortiz proved that the treatment of Native Americans was in fact genocide.

Cohen invited some of his graduate and undergraduate history students to create a panel to discuss their respective historical areas of study to highlight some holes in their education that need attention.

On the student panel that presented before Dunbar-Ortiz, Antoine Johnson, a history graduate, said the purpose of the panel was not to offend history staff but to give an academic critique for the purpose of enhancing education and giving a holistic understanding of race, class and gender.

“We need to acknowledge our own biases upfront,” Johnson said.

Alex Vasquez, a senior history major, said there are stereotypes and misrepresentations in films and TV shows like, “The Birth of a Nation,” “Leave it to Beaver,” and “The Andy Griffith Show.” Watching minorities playing roles as janitors or servants really limited her idea of the options she had growing up.

Vanessa Madrigal-Lauchland, a history graduate, talked about the meager mention of Chicano history in American history.

“Our history is interdisciplinary … [but] I had to search for my own history,” Madrigal-Launchland said.

Cesar Chavez was not the only farmer’s rights activist but the average student may not know much about them unless they took an elective history class on Chicano history.