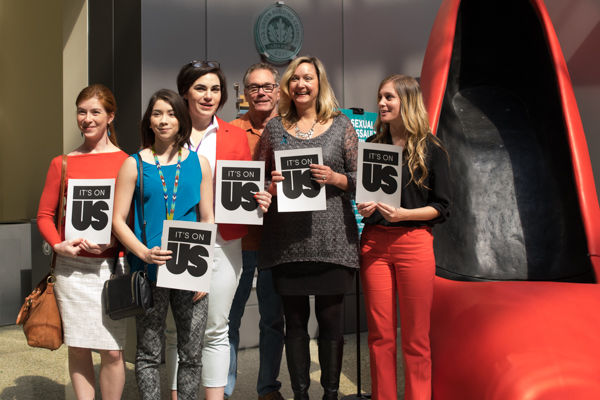 Staff pose with "It's on us" flyers representing the importance of Sexual Assault Awareness Month in the WELL, Monday, March 29.

Along with many campus representatives, Sacramento State President Robert Nelsen kicked off Sexual Assault Awareness Month by speaking in The WELL lobby next to a large red heel Monday morning.

Nelsen said that sexual assault is something that can be stopped.

During the month of April, organizations around campus will be hosting events to bring attention to sexual assault and highlighting prevention practices and resources for victims.

At the event, Associated Students, Inc. President Melissa Bardo said ASI and the university have a renewed focus on bystander intervention.

“We need to work to write a new narrative that says sexual assault is not OK,” Bardo said.

The prominent red shoe is a display on loan from WEAVE, which stands for “Women Escaping a Violent Environment,” a local crisis center that aids survivors of domestic violence and sexual assault. The shoe represents the annual walk held in Sacramento called “Walk a Mile in Her Shoes.” Participants complete the walk wearing heels to show their support for survivors of sexual assault and domestic violence.

According to Beth Hassett, CEO and executive director of WEAVE, Sac State is “leaps and bounds” ahead of other communities.

“I am so proud,” Hassett said. “I can’t think of a better home for our shoe as you kick off the month.”

To conclude the kick-off, Reva Wittenberg, the associate director of campus wellness for Student Health and Counseling Services, commented on the progress Sac State has made in the recent years.

Wittenberg said that, in the past, people were not addressing sexual assault, and the only prevention being taught was self-defense. Fast forward 20 years, and now the president of the U.S. is talking about it.

“This month shows how committed we are to this issue,” Wittenberg said.