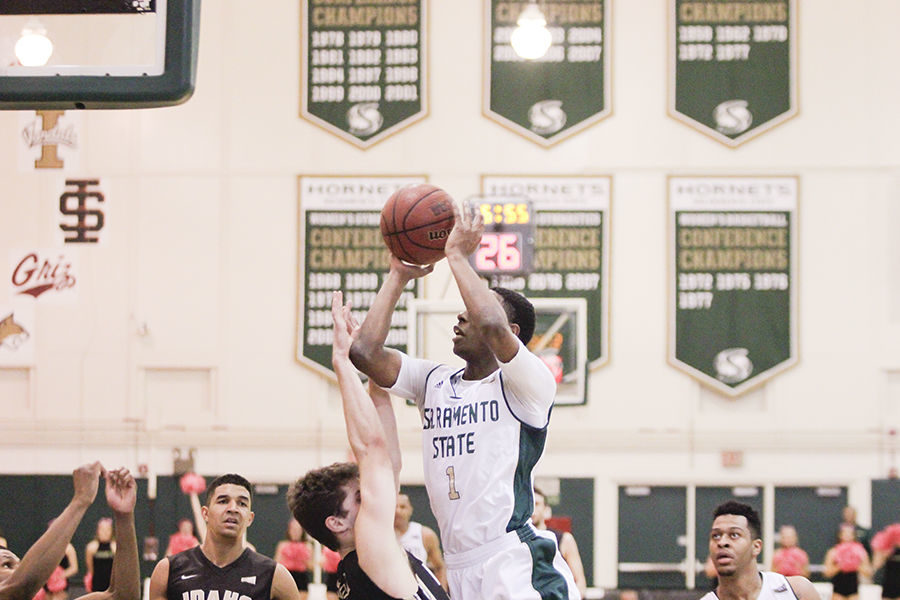 Senior Dreon Barlett attempts a shot in the paint against Idaho in the Hornets Nest, Saturday, Feb. 20. Barlett had 12 points and two rebounds in the Hornets' 68-65 victory.

Southern Utah, not unlike Sac State, has had a tough season, especially in Big Sky Conference play. The Thunderbirds are 2-5 on the road, and 1-8 at home in conference. The Thunderbirds had lost four straight road games before beating Northern Arizona 69-59 in Arizona on Feb. 27.

Kennedy will be the deciding point for whether the Thunderbirds can win this game. Kennedy is arguably the Thunderbirds most balanced player. However, even though he scores in double figures, he takes a lot of shots to get there. Kennedy is shooting 39 percent (86-of-221) from the floor this season. If Sac State can force Kennedy to finish below that threshold, the Hornets stand an excellent chance of winning this game.

Sophomore guard Marcus Graves will be a major factor for the Hornets. Graves has seen some of his stats diminish with the return of senior guard Cody Demps from injury last month, but he still poses a threat from behind the arc and on the defensive end, where he averages nearly two steals per game. If Graves can match the status quo of his season, it will be a long night for Southern Utah.

The second game is the finale of the regular season for Sac State. It is also an important night for guards Cody Demps and Dreon Barlett, as they will both be honored for Senior Night. Senior Night generally falls on the final home regular season game for teams who celebrate their seniors with highlights, standing ovations and speeches from the senior players. It is a long-standing tradition in the college basketball and high school basketball realm.

Northern Arizona comes to the Nest not having traveled to Sacramento since January of last year. The Lumberjacks beat Sac State in Arizona 70-68 but lost to the Hornets in Sacramento, 78-73. The Lumberjacks are 1-6 on the road in Big Sky Conference play this season.

Similar to Sac State, Northern Arizona has gone the majority of conference games without a senior leading scorer. Senior guard Jaleni Neely has been out since December with a knee injury. He was averaging 10.6 points per game before going down with the injury.

Freshman guard Torry Johnson has scored 16 or more points in three of his last five games for Northern Arizona. If he can have a breakout game similar to those, the Lumberjacks can put the pressure on Sac State to score efficiently all game. When the Hornets have gone down in games, especially early on, they struggle finding a way to come back.

Senior guards Cody Demps and Dreon Barlett will be the men of the night for the Hornets. However, they will have to balance their emotions with their game play. This can be a challenge for both players for different reasons.

Demps is arguably the Hornets’ best all-around player but has had a trying season battling back from injury. Demps will have to control that emotion and instead use that to his advantage. Barlett has started for the Hornets for the first time in his four years at Sac State. He has nearly tripled his point total per game and is one of the best three-point shooters in Hornet history. Barlett will have to relax as the adrenaline could have an effect on his shot.

The games have a scheduled start time of 7:05 p.m. at the Hornets Nest. Both games will be available to stream for free via watchbigsky.com and will be live-tweeted at @sh_sports.