Hornets win when it matters most 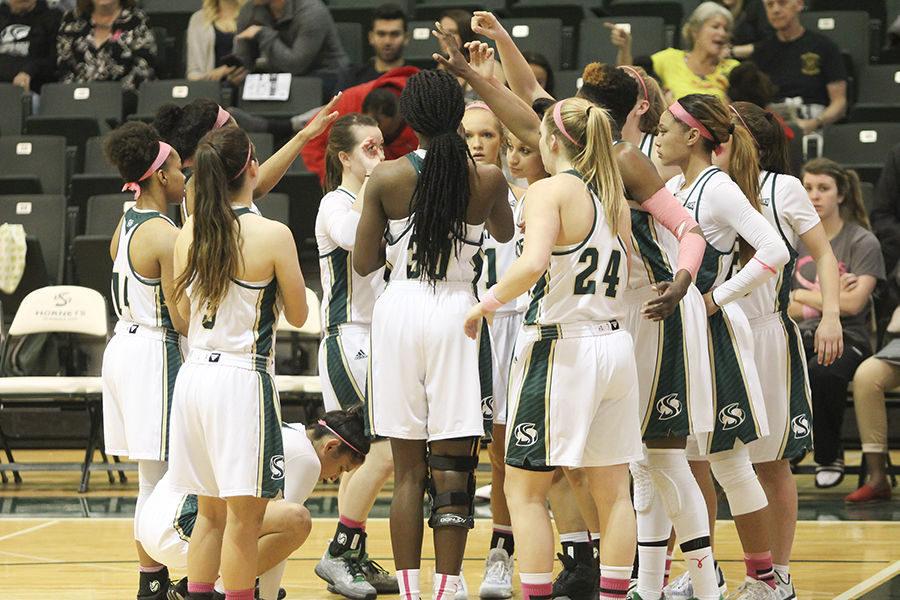 The Sac State women's basketball team huddles up during halftime against Northern Colorado in the Hornets Nest, Thursday, Feb. 25. The Hornets went on to win 83-72.

For the Sacramento State women’s basketball team, it’s not how they start but how they finish.

After falling down early in the game, Sac State (11-15, 8-7 in the Big Sky Conference) pulled itself together defensively to capture a much needed home win, 83-72 over the University of Northern Colorado (11-14, 6-9 in Big Sky) at the Nest Thursday night.

Senior forward Sydonia Daniels was the key for Sac State tonight, pulling in 13 rebounds in a hard-fought game for both teams.

Sac State head coach Bunky Harkleroad saw the struggle his team had last night against Northern Colorado’s defensive press, but was proud of the overall effort.

“It always gets me nervous when we don’t get more shots up, especially more three balls, than our opponent,” Harkleroad said. “However, we’ve shown that we can win when we don’t have those crazy numbers on our side.”

The first quarter was off to a sluggish start, as Northern Colorado was up 10-2 before the three-minute mark had passed. Senior guard Kyleigh Hiser, who came into the game leading the team with 39 three-pointers, made two in the quarter to give the Bears a 26-20 advantage over Sac State to end the first.

In the second quarter, the offense for Sac State started to heat up. Senior guard Adella Randle-El went 5-for-5 from the free throw line, and the Hornets added 10 offensive rebounds. With 4:21 left in the quarter, senior guard Ericka Magana made a layup to give the Hornets their first lead of the game, 32-31. The Hornets outscored Northern Colorado 22-14 in the quarter, finishing the first half with a 42-40 lead.

The crowd started to sense that something was brewing for Sac State, amping up the cheering as the first half came to a close.

Junior Diane Hie was among the many Sac State faithful who kept cheering them on, even when the Hornets came out of the gate struggling,

“I was nervous just watching in the beginning, because we were down by a lot,” Hie said. “But by halftime, it started to pick up, it was awesome.”

There was reason for concern going into the third quarter, as it was normally the time when Sac State struggled the most during the season. Thursday night, however, proved to be different. Daniels started off the second half with a layup to bump the Hornets’ lead up to four, keeping the inside presence alive.

Northern Colorado started to press back at Sac State offensively, getting to the free throw line for the first time the entire game. The Bears went 4-for-4 from the line in the quarter, but it wasn’t enough to take the lead back from Sac State, who took a 62-58 lead into the final quarter.

Sac State ran into some trouble defensively in the fourth quarter, as Magana fouled out early. The Hornets didn’t let that deter them, however, as junior guard Brianna Burgos and sophomore guard Maranne Johnson started scoring at will. Both players scored six points apiece in the final quarter, with Burgos making the final two points of the game on free throws to cement the victory.

The Hornets had four players (Burgos, Johnson, Magana and Randle-El) score in double figures, and also put up their best defensive performance of the season, only allowing Northern Colorado to get to the free throw line seven times, despite the Bears out-shooting the Hornets 75-70.

Daniels, whose defensive performance helped the Hornets in the victory, said she was glad she was able to give back to her team after what had been a rough week for her.

“It’s just an honor and a blessing,” Daniels said. “To be able to give back to my team, I love it. I want to give my team the best Sydonia I can give.”

Sac State plays its final game of the season this Saturday against North Dakota. It will also serve as the final home game for Daniels, Magana and Randle-El, who are all seniors. The game starts at 2:05 p.m. at the Nest, and can also be streamed live via eversport.tv/big-sky.