Hornets stir up a miracle 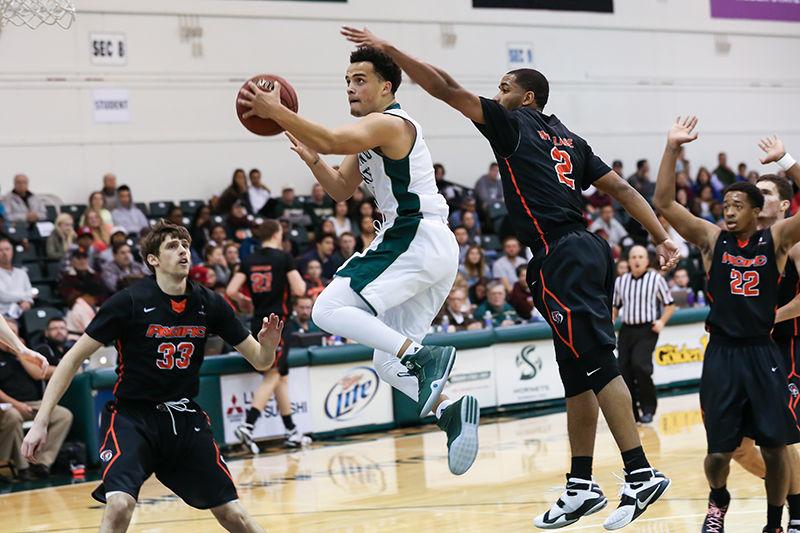 Guard Marcus Graves drives into the lane to attempt a layup against Pacific at the Hornets Nest on Sunday, Nov. 29, 2015. Graves led the Hornets in scoring with 19 points in a 79-71 win.

A Sac State win (10-10, 3-6 in Big Sky) didn’t seem to be in the cards early Thursday night as the team struggled from the floor in the first half and couldn’t seem to stop Montana’s post players. As the game continued, it began to be reminiscent of the Grizzlies’ 19-point win over the Hornets earlier in the season.

Down 20 points in the second half, though, the Hornets finally began to click behind center Eric Stuteville and the hot hands of guards Jeff Wu, Marcus Graves, and Jiday Ugbaja. It was one of the biggest comebacks in Sacramento State’s history. The Hornets’ head coach, Brian Katz, thought it could get them out of their funk.

“We were very bad on defense in the first half,” Stuteville said. “[We] manned up, guarded up in the second half.”

Jeff Wu began to steal the show in the middle of the second half, connecting on two 3-pointers and a tough jumper off the glass. That spark led to other Hornets finding their groove, as well as the fans who hadn’t had much to cheer about all night.

Jiday Ugbaja hit a jumper late in the second half for the Hornets, which gave them their first lead since three minutes into the game. Ugbaja finished with 18 points, a career-high (his previous career-high was eight points).

Ugbaja was forced into a starter’s role when Demps went down, and Katz said he has seized the opportunity.

“We didn’t know what we had in Jiday,” Katz said.

Marcus Graves finished with 18 points, five assists, and four rebounds. His three steals, though, are what kept the Hornets in the game and eventually the lead late. Graves also converted eight of his 11 free throws down the stretch, sealing the Hornets’ win.

Justin Strings also contributed 13 points for the Hornets. Brandon Gfeller and Martin Breunig scored 21 and 20 points, respectively for the Grizzlies. Walter Wright, a 5-foot-10 guard for the Grizzlies, surprisingly led all rebounders with 11.

It was only the second Grizzlies’ conference loss of the season (8-2) and the win pushed Sac State’s overall record back to .500 (10-10). The Hornets also racked up their most points in a half this season, 54, with the Grizzlies having given their most in a half.

Sac State will play at the Hornet’s Nest Saturday at 7:05 p.m. against Montana State, while Montana will head on to Oregon to face Portland State on Saturday. Both games will be available via watchbigsky.com