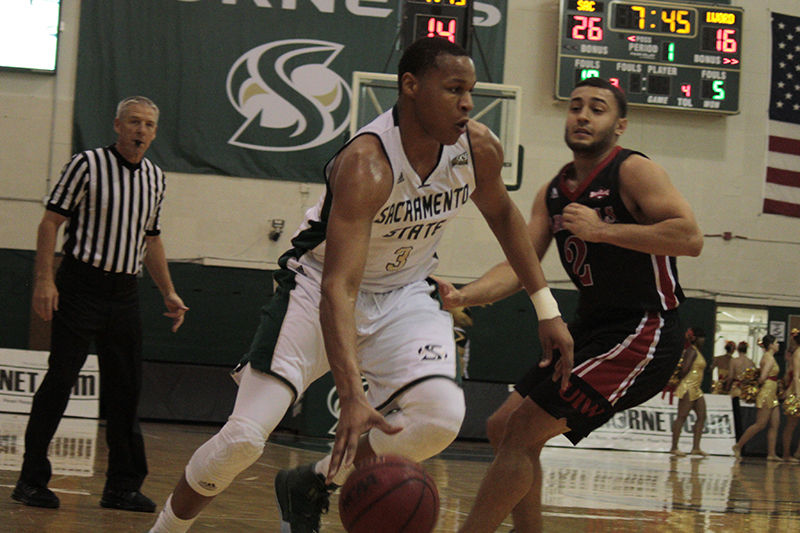 Justin Strings moves the ball down the court just before making a basket while Mitchell Badillo trys to defend during Sacramento State's men's basketball game against Incarnate Word on Monday, Dec. 7, 2015 at the Hornets Nest.

Along with Graves was forward Justin Strings (17 points), guard Dreon Barlett (10 points) and their barrage of three-pointers. In all, the Hornets finished with 10 three’s, shooting 38.5 percent from 3-point range.

The Hornets were looking for a rebound game after losing back to back games at home and six straight on the road. Conference play has been especially tough for the Hornets of late, entering Thursday’s game at 1-5 in the Big Sky Conference.

“Haven’t seen those numbers since the preseason before [Cody Demps] got hurt. That’s always good to see,” Coach Katz said in a phone interview.

Offense wasn’t the only key for the Hornets. The defense held the Vandals (12-9 overall, 4-4 Big Sky) to two separate five-minute scoring droughts in the first half, and Coach Katz said there was a good reason for that.

“Discipline. We got back to the basics in practice,” Katz said. “Guarding the ball was critical in practice and it carried over. The kids have been really committed.”

The Vandals, the best rebounding team in the Big Sky entering the night, finished with 37, but the Hornets weren’t far behind finishing with 27 rebounds.

The Vandals responded to the Hornets small lineup by playing two big men for the majority of the game. That didn’t lead to the result the Vandals were hoping for as the Hornets were hot from three early, shooting 40 percent from 3-point range and 48 percent from the field as a whole.

The second half was a different story. The Vandals, down 21 at one point late in the first half, cut the lead to single digits in the second half behind Chad Sherwood’s hot hand from behind the arc. Sherwood finished with a game high 22 points.

The lead was down to one before Graves hit a three with only a couple of minutes remaining to extend the lead to four.

Turnovers proved to be costly for the Vandals though, as they finished with 14, most of them coming at critical moments in the second half.

Sac State capitalized on those turnovers and finished strong from the free throw line to close out the game. The win was their first in Moscow since 1972.

Nick Hornsby led the Hornets with eight rebounds. Eric Stuteville came in off the bench for the Hornets and grabbed five rebounds, two of them on the offensive glass.