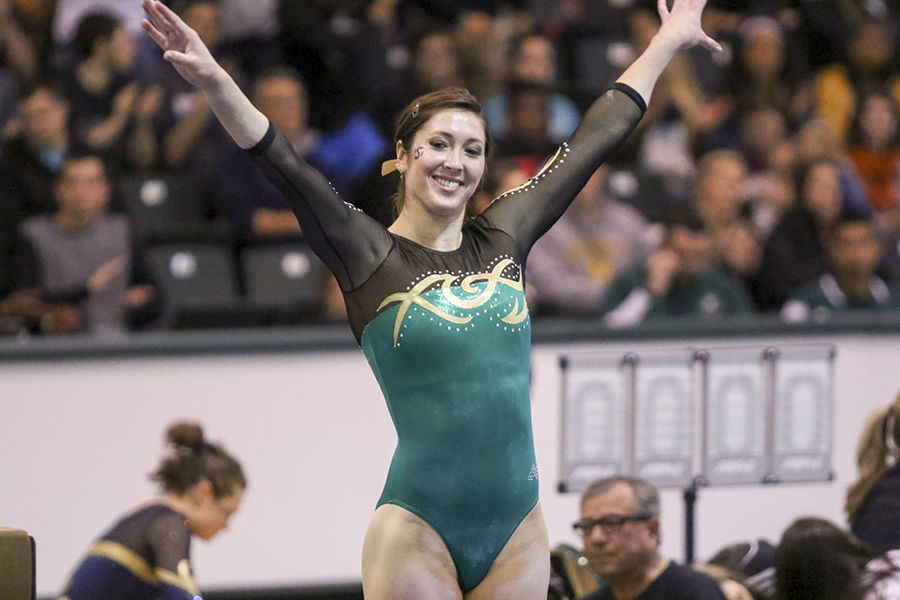 Sac State gymnast Kalliah McCartney finishes a successful beam routine during the Sac State-UC Davis meet on Friday, Jan. 29. McCartney finished with a 9.825 in the beam, leading to an all-around score of 39.300.

It was the Hornets’ first home meet of the 2016 season and they defended the Nest with a victory over their causeway rival for the second time this season.

Sac State established an early lead with a more than two-point advantage after the first rotation, in which the Hornets scored 48.875 on vault and the Aggies scored 46.450 on the uneven bars.

“A win against Davis is always very wonderful. We didn’t have a great meet,” Solorio said. “As you can see we fell on bars, which is very uncharacteristic of this team. But, they never gave up, they persevered and were very tenacious.”

UC Davis, however, made an impressive comeback attempt after outscoring the Hornets on beam by a score of 48.800-48.425 and tying them on vault by matching Sac State with a score of 48.875.

The Hornets seized control with a strong team performance in the floor exercises with five women scoring 9.775 or better, including a first place effort by sophomore Lauren Rice.

Standout senior Kalliah McCartney led the team with a season-high 39.300 all-around score, making her the top all-around gymnast at the meet for the third time in a row. McCartney was especially impressive in the bars discipline, scoring a season high 9.850 to grab first place.

McCartney has improved her all-around score every meet this season and entered Friday’s meet ranked 24th in the country.

Sophomore Lauren Rice turned in a strong performance as well, finishing tied for first in the floor exercise with 9.875 and third on bars with 9.800 behind only teammates McCartney (9.850) and Cassie Benning (9.825). Rice finished the meet second in all-around.

Junior Julia Konner tied her career high on vault with a 9.875, earning her a first place in the event for the second time this season.

The Hornets had a first place finisher in three of the four events, only failing to win on beam where the Aggies’ Stephanie Stamates and Katy Nogaki finished 1-2 with 9.875 and 9.850 respectively.

The 194.250 that Sacramento State scored on Friday was actually their lowest output of the young season, but it was enough to win the meet and earn the Hornets 2.5 points in the Causeway Cup.

Friday’s meet marked the Hornets’ best performances of the season in the floor and vault disciplines, but their worst performance on the uneven bars and beam, meaning there is room for improvement on what is already a strong team.

The Hornets will be in action once again on Friday, Feb. 5 when they face the Seattle Pacific University Falcons in their second home meet of the season.