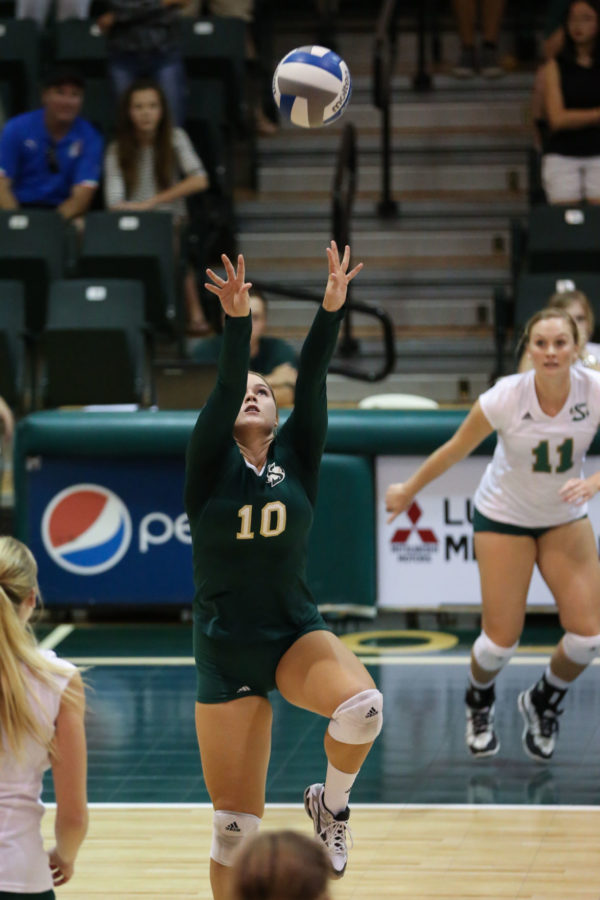 Sacramento State defensive specialist Lexie Skalbeck sets up for an attack against Northern Arizona University on Saturday, Sept. 26, 2015 at the Nest. Skalbeck lead the team in digs with 24 in a 3-1 win over the Lumberjacks.

The Sacramento State volleyball team (16-3 overall and 3-1 in the Big Sky Conference) defeated Weber State University (5-9 overall, 1-3 in Big Sky) on Saturday night on the road.

Sac State is in second place in the Big Sky Conference with Idaho State University still undefeated in conference play.

“Everything started with our passing,” said coach Ruben Volta. “We set really well tonight and everybody was hitting well. Our setter was mixing up the offense, we worked very well offensively tonight.”

Sac State started the match with a dominant first set winning 25-13. The team had a team hitting percentage of .379 and only 4 errors. Outside hitter Sloan Lovett had a great set with 9 kills and a .429 hitting percentage. She led the team in kills with 15 on the night.

The Hornets rank third in the Big Sky Conference in service aces averaging 1.69 per set.

Weber State offered more resistance in the second set, but the Hornets played even better than the set before. The team’s hitting percentage improved hitting .429 and they had less errors with only three.

Lauren Kissell led the offense in the set with five kills and hit an impressive .667 through the first two sets. She ended the night with 14 kills and a hitting percentage of .650.

The Hornets didn’t slow down in the third set jumping out to a 5-0 lead. Weber State called a timeout with Sac State up 15-18. The Hornets had a .529 hitting percentage at this point in the set and scored the next four points in a row to put the set out of reach. The final tally was 25-18 as Sac State hit .402 on the set.

They continue their road trip with a match against Eastern Washington University (9-6 overall, 4-0 in Big Sky) Thursday Oct. 9 at 6 p.m. The Hornets last meeting with Eastern Washington on Oct. 9 of last year was one they lost in five sets.