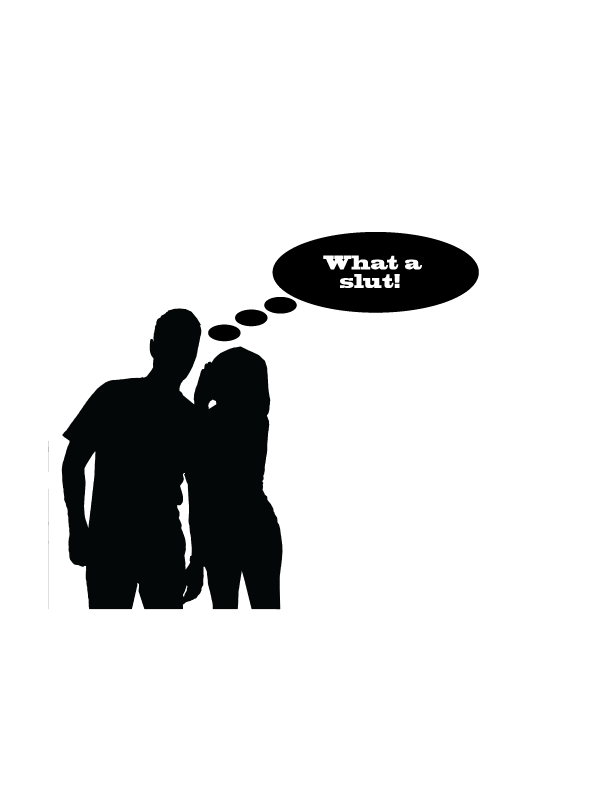 In a culture in which society blames victims for their circumstances and tells women to wear clothing that will not provoke men to lust after them, “slut-shaming” has become a common practice.

The term “slut-shaming” is used to make people, usually women, feel inferior or indecorous for their sexual behaviors.

Sexual freedom, which has been given to straight men without question, must be fought for by the LGBTQ community and women alike. Heterosexual men seem to be praised for their sexual conquests but women are considered promiscuous for theirs. It also seems that the general consensus is that sex in the LGBTQ community is frowned upon all together.

“Slut-shaming” is not a new concept but awareness is coming to the forefront.

“The concept of ‘slut-shaming’ stems from the idea that there is a ‘right’ way to be a woman and it’s frustrating,” said Johanna Pugh, a theater minor. “It’s so easy for some people to criticize women and the choices we make. It’s really not anybody else’s business.”

History should also be considered as to why the act of “slut-shaming” has propagated through time and society.

Quany Wright, a religious studies major, used Greek mythology to explain the term’s historical usages and its pejorative context by saying, most goddesses were associated with fertility but few were seen as sexual.

“Aphrodite was probably the most sexual goddess but was heavily associated with violence due to her sexuality,” Wright said.

“I think that it is unfair that men are put on this pedestal for having multiple sex partners, yet, women are slut-shamed for having more than can be counted on one hand,” said Marissa Williams, a child development major. “If women have the same mentality as men regarding sex they get ostracized from other women because they don’t want to be associated with ‘hoes’ and men feel the right to disrespect them. Women should be able to have sex with whoever and however many partners they want.”

This opinion that women’s sex lives are held to a double standard is shared by many.

“For the longest time women weren’t allowed to be seen as sexual beings for themselves,” Pugh said. “It’s infuriating that women still don’t have complete rights to our own bodies. It’s disappointing to witness some women shaming others. Some women are more likely to judge or shun or bad mouth another women than support the fact that she’s making her own decisions.”

Though some men in certain social groups encourage “slut-shaming” by affirming highly sexual behavior in a positive light amongst themselves, the general consensus is that women should not be overly-sexual because society will shame them for it.

“I don’t think that way,” said Vincent Alexander, who is in the nursing program at Sac State. “It’s their life, let them do what they want.”

Pugh believes people should be allowed to do what they want with their own body without being looked down upon for expressing their individuality, sexuality or creativity.

“Who cares how many people someone has slept with?” asked Pugh. “What does that have to do with me? What two consenting adults do on their own time isn’t my business; just like what I do and who I choose to do it with isn’t anyone else’s either.”