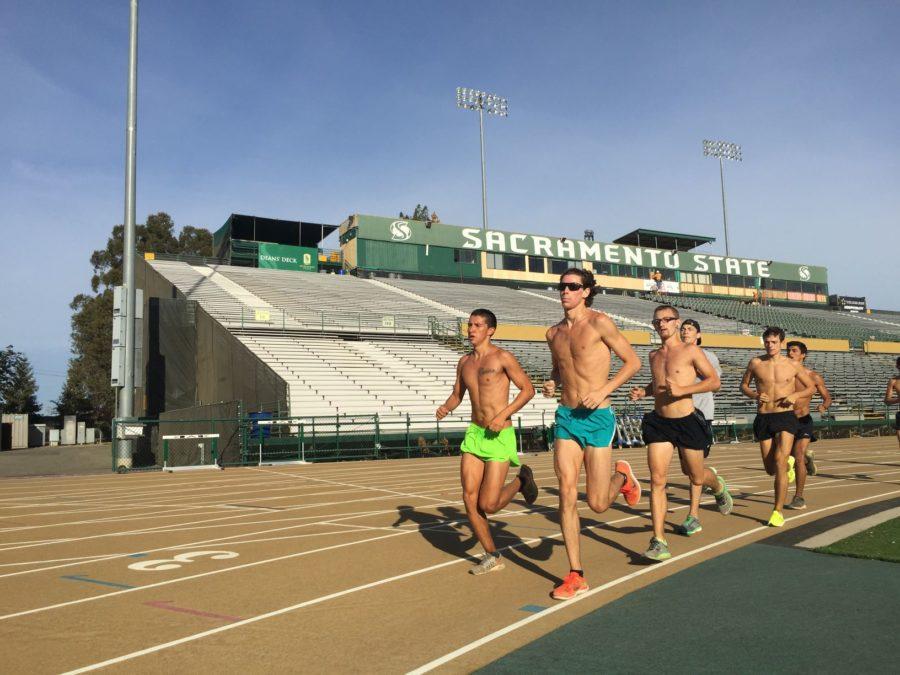 Sacramento State's men's cross country team takes a lap at the end of their practice on Friday, Aug. 28, 2015 at Hornet Stadium.

The Sacramento State cross country team has undergone a transformation over the last few months.

Between the men’s and women’s teams, 12 runners departed from the team since last season. However, most of the women’s team returned, including seniors Amanda Garcia and Chloe Berlioux, the only Hornets to place in the top 100 in the women’s 6K at the 2014 NCAA West Regional. New members of the team include freshman Amelie Pear, Amy Quinones, Briana Hendricks, Emma Armstrong and junior Haley Heinemann.

Scheuer, a redshirt sophomore, commented on the men’s lack of depth after the team’s first meet of the year, the 12th annual Aggie Open at the Putah Creek Reserve Course in Davis.

“We’re just lacking depth right now, but we lost seven to eight guys last year, so we didn’t have as much depth as the Davis guys,” Scheuer said.

The team has shown promise despite the turnover in student-athletes.

In the Aggie Open, the Hornet men and women took home first place in the individual results, with Huston and Berlioux claiming the titles. However, the team lost the meet overall, with UC Davis winning both the men’s 6K and women’s 4K meets.

Berlioux, who won on the women’s side, praised her team for keeping together throughout the tough conditions of the race.

“The wind was strong, but it was strong for everybody. So we just stayed smart through the beginning and stayed strong through the finish,” Berlioux said.

Laura Harmon, the newly hired cross country coach, was optimistic about her team’s finish despite the inexperience.

“We can step away from today, and a lot of people can have a better understanding of what it’s like to race,” Harmon said. “But obviously, to pull out the win on both the men’s and women’s side…Overall, not a bad day.”

Harmon came to Sac State from Texas Christian University, where she was the cross country coach in 2014 and served as an assistant track and field coach in 2015.

In July, previous coach Joe Eby left Sac State to accept a head coaching position at Baldwin Wallace University in Berea, Ohio. In his two years with the Hornets, he led both the men’s and women’s teams to the NCAA West Regional; in 2014, the women’s team finished 14th.

On Aug.12, three weeks before the start of school, Kathleen Raske resigned as the director of the track and field program when she accepted a similar position at her alma mater, Southern Illinois University.

Working as the primary track and field coach, Raske guided the Hornets to 17 Big Sky Conference championships, eight second-place finishes, and produced 15 NCAA All-Americans. She also made history as the first female coach to take a Division I men’s team to five conference championships in NCAA history in any sport.

Due to the sudden departure of Raske only weeks before school began, the athletic department had no time to conduct a proper national search for her replacement. During it’s search, the department named Jeff Magley as the interim director of the track and field program.

Magley is no stranger to the department, as he has been affiliated with the program for the last 10 years as their throwing coach. On top of that, he manages the program’s equipment and apparel, as well as their statistics. In his time at Sac State, he has produced 12 Big Sky champions, three NCAA championship finalists and two NCAA All-Americans.

Magley says a lot of factors came into the university’s decision to name him the coach, but he is truly excited to have the opportunity.

“As the senior member of the remaining staff, I think the timing of it played a factor, in terms of providing continuity to our team and program to start the school year,” Magley said. “I’m thrilled to death. I’ve poured my heart and soul into this program, and I’m really excited about the opportunity to be the director and move this program in a great direction.”

The Hornets will be lacing up next at the Fresno State Invitational on Friday.