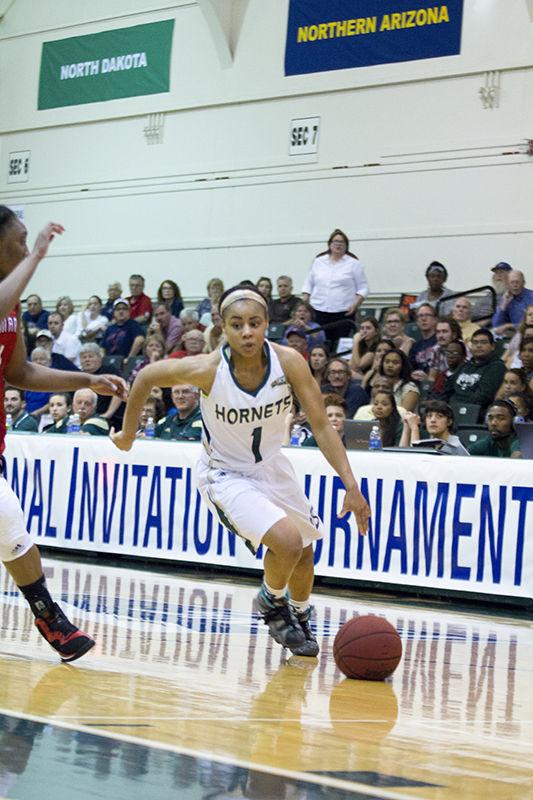 Senior Fantasia Hilliard dribbles past a Saint Mary's defender on Thursday, March 26, 2015 at the Hornets Nest. The Hornets were defeated 77-69.

Sacramento State women’s basketball fell to Saint Mary’s College, 77-69, in third round of the Women’s National Invitation Tournament on Thursday.

The Hornets close a historic season after putting their all into the final match against the Gaels.

“It was definitely a heartbreaker, but I think we played hard, we played for each other and we kind of laid it all out there,” said senior Takara Burse.

Burse responded to how she felt with this being her last game with Sac State.

“It was definitely sad, [and] it was sad seeing that the score wasn’t in our favor,” Burse said. “I am actually glad we got to finish our last game at home in front of our crowd. It was just a bitter sweet feeling.”

The Gaels managed to control the Hornets’ offense, limiting Sac State to an overall field goal percentage of 29.4 percent and a 3-point percentage of 28.6 percent.

“I honestly thought we played really hard because in the beginning I think were down by a lot, but we came back [and] kept the intensity going,” said senior Andrea Chenier. “But our shots were not falling as much as we would have liked.”

The Hornets in the first half of the game had trouble getting and maintaining a lead as the contest started off with a missed jumper by Sac State’s Burse. Saint Mary’s immediately came up with the rebound and Hayley Hendricksen scored a layup to put the Gaels ahead early.

Senior guard Fantasia Hilliard was quick to steal the lead for Sac State after scoring a 3-pointer. The Hornets held the lead for a little over a minute when Saint Mary’s Lauren Nicholson tied the game 6-6 at 17:27 in the first half.

Chenier, senior guard, nailed a 2-pointer while being fouled. She hit her free throw to give Sac State the three-point lead, 9-6, at 17:16 on the clock. This was the final lead for the women in the first half.

The Hornets shooting percentage at the end of the first was 30.2 percent, only successfully scoring 13-of-43 field goals. Their 3-point field goal percentage was 34.6 percent (9-of-26).

Saint Mary’s ended the first half with a better field goal percentage of 54.7 percent, scoring 17-of-34 shots. The Gaels did not attempt any 3-pointers in the first.

Defensively, Sac State had a total of 10 steals and 12 rebounds but entered halftime trailing by four with the score 41-37.

The Hornets tried to fire back offensively on the Gaels, but the squad only managed to take the lead twice in the second half.

Maranne Johnson put Sac State ahead in the second half after nailing a 3-pointer to give the Hornets their highest lead of the game with 57-52 at 10:25 to go.

The game was tied up by Saint Mary’s until Sac State’s Hilliard quickly came back with a layup to take a two-point lead. The Gael’s Carly Turner swiftly returned with a jumper tying the game once again at 59-59 with 8:28 to go.

The Hornets lost their advantage with six minutes left in the contest, but Sac State’s Margaret Huntington was able to tie up the game. However, the Gaels would not relinquish their lead after Shannon Mauldin was fouled by Hilliard.

Mauldin cashed in both of her free throws to put Saint Mary’s up for good with under six minutes left to play.

The game ended with the Hornets scoring 32 points and the Gaels 36 in the second half.

Saint Mary’s power on offense came from Nicholson scoring 19 points, Hendricksen with 16 points, Mauldin with 13 points and Stella Beck was the last Gael to score double digits with 10.

“I think we played really hard and it just didn’t go our way,” said sophomore Huntington in regards to the team’s performance.

“I am really proud of the whole team for making it this far,” Chenier said. “The bar is set high for next season.”

Sac State women’s basketball caps off a historical season after making its first appearance in the WNIT this year. The Hornets’ overall record is 18-16.