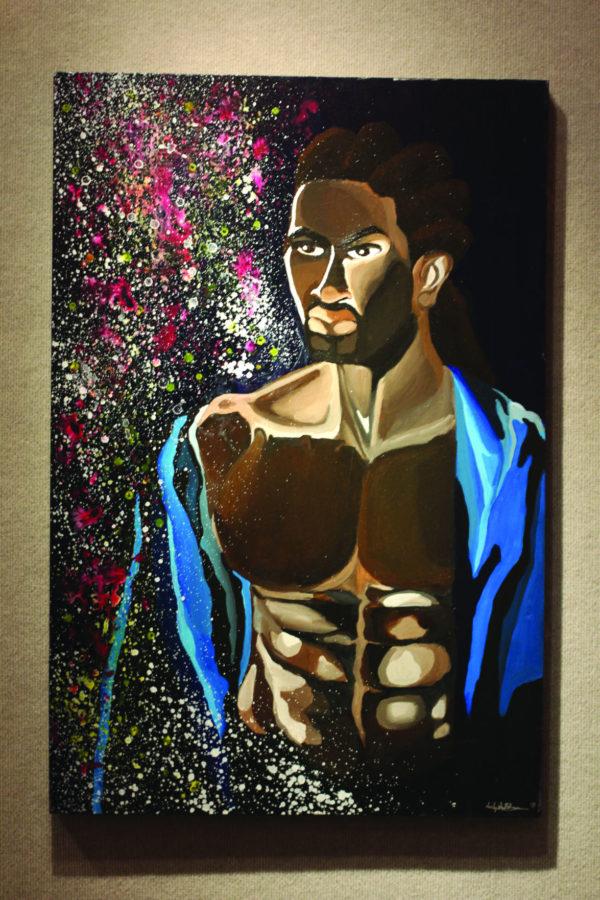 Sacramento State is kicking off Black History Month with an evoking art exhibit. Delgreta Brown, the featured artist of the month, is showcasing her contemporary artistry in hopes to shed a more positive light on African-American culture.

“(N)Eon: The New Eon,” according to a press release, is “a surreal, luminous, spiritual, and imaginative visual narrative about culture, legacy, and futuristic perspectives.

“I wanted to bring about a lot of positivity,” said Brown. “And introduce a kind of spirituality, and both of those are uplifting notions.”

Brown said spirituality is important to her and her artwork because it is a common practice of hers.

Though Brown has had her artwork shown elsewhere with other artists, this Sac State showing is focused completely on her talents. She said, she is excited and has a lot of gratitude.

“The concept of the exhibition is neon- it represents a most [distinct] and vibrant color. Brown plans to expand the mere definition of the word through this exhibition,” according to an article on newsreview.com. “The works in this exhibition has a surreal, ethereal or dream-like quality that underscores a sense of time displacement.”

As Brown paints color on to a blank canvas and creates something futuristic, it is clear that pieces like “We Are the Night” are highlighted with aspects of hope for the future of people, especially those who have been disenfranchised in anyway.

“It is very important for African-Americans to be engaged with positive images,” said Brown. “We don’t see enough of those.”

As current events like Ferguson and issues surrounding police brutality against people of color, especially African-American males, are continuously in the media; Brown said, as of late she has kind of felt under attack. Her heart goes out to people who have been traumatized by issues like these and others.

“I don’t think [trauma] is healthy for our spirit, individually or collectively,” said Brown. “I wanted to do something to combat [that] and say, ‘hey, we can do better and we are better.’”

Being able to spread love and positivity seems to be a passion of Brown’s. It is noticeable in the statements made in her artwork and in the way she chooses to paint an image, and even in the colors she chooses to use.

Though her work may be African-American centric, it has a broader spectrum.

“The [themes] that are found in the exhibition art are universal. Anyone can relate to them. I think that is what’s beautiful about the show,” said Brown. “I want to get away from any divisive thinking about this being a black show, it is about humanity.”

Brown’s parents collected art when she was young, she has seen it her whole life and seems like she has an understanding of the power art possess. Like some of the music she listens to, her art is vibrant.

“Pieces like ‘A.M. Love’ is a nod to hip-hop,” said Brown. But it was made clear that no matter what someone’s taste in music is or what their spiritual beliefs are; “It is all about love,” said Brown.