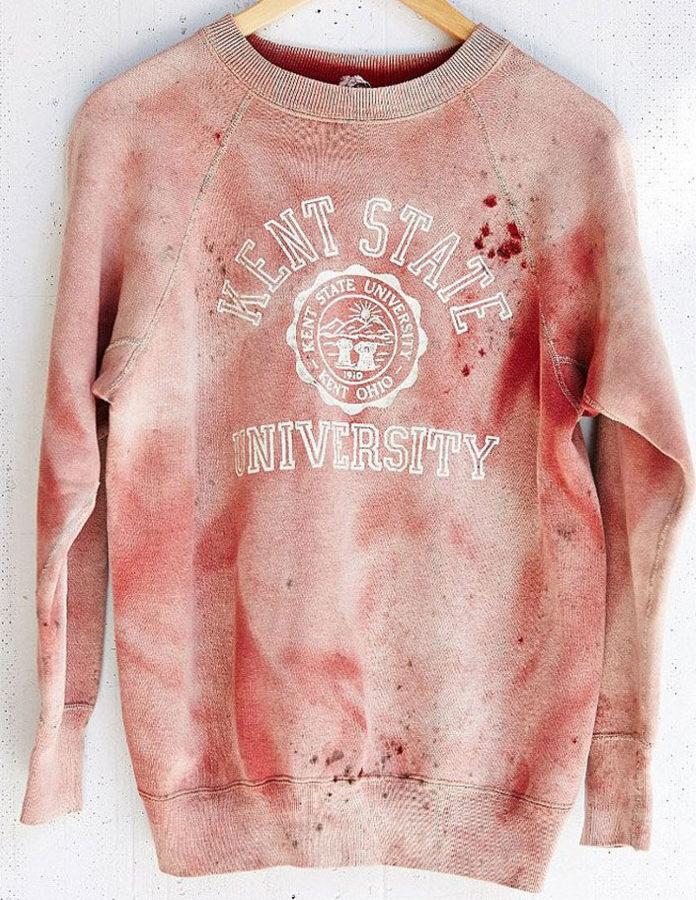 The $129 sweatshirt was pulled from the online website and listed as “Kent State Vintage Sweatshirt Sold Out”.

Since the uproar over the distasteful display of capitalism on a tragic event, Urban Outfitters has apologized, but denies the intention to relate the apparel to the 1970 shooting.

Kent State University released a statement of their anger with the company Monday.

“We take great offense to a company using our pain for their publicity and profit. This item is beyond poor taste and trivializes a loss of life that still hurts the Kent State community today,” the statement read.

The design cannot be mistaken as “unintentional”. The faded red sweatshirt has what appears to be blood splatter the color of a deep red compared to the actual color of the apparel. It does not seem like an accidental discoloration. The deep red spots appear, not just dropped onto the sweatshirt, but sprayed or smeared as if someone near them had been shot and the blood hit their clothes.

The company attributes the red stains, located near the left armpit and bottom of the sweatshirt, to the “discoloration from the original shade of the shirt”. They also stated the “holes were from natural wear and fray”, which is a confusing statement because a mass produced sweatshirt could not have “natural” holes from wear.

If Urban Outfitters had the goal of creating a Kent State sweatshirt, why is it red? More importantly, why are there deeper red, sprayed droplets that look like blood stains?

They said the sweatshirt was to carry on the “sun-faded vintage clothing” line and the final discolored product was not the intended look. If so, why put it on the market?

It seems all too coincidental. According to an online article on the New York Post by David K. Li, Urban Outfitters has produced distasteful apparel and products before.

Li explains in 2010, the company made a V-neck shirt with the words “Eat Less” across it. They also created pens made to look like heroin needles with the saying “I love Hairroin” to promote a hair salon they were opening. Urban Outfitters must have a good PR team if the company continually decides to sell controversial products for profit.

Urban Outfitters obviously likes to push the limit. It may be 44 years after the tragedy took place, but the sweatshirt is plainly outlandish and deserved to be pulled offline.