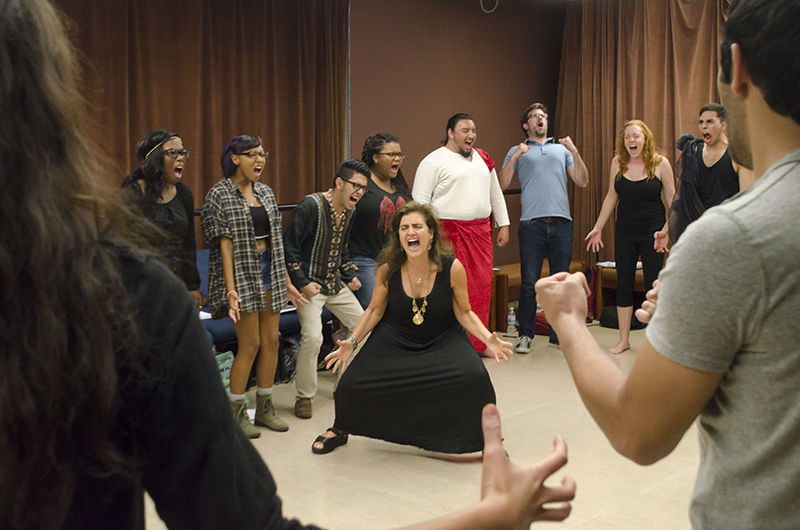 Professor Andonia Cakouros leading her students in an exercise to help bring out their true emotions when performing and taking on the persona of a character.

It is an understatement to say a lot of work goes into being a teacher. The hours, the material and the classes—it all requires an enormous amount of commitment and passion.

For theatre professor Andonia Cakouros, teaching has been her life.

Cakouros will be retiring this spring after 38 years of teaching theatre at Sacramento State. Cakouros, 61, was hired straight out of graduate school from Northwestern University in September of 1977.

Since then, she has built a career of advising and coaching theatre students and is happy with the legacy she will be leaving behind.

At first, Cakouros was unsure if she was going to teach or solely pursue professional acting, but became convinced it was for her after being a student-teacher in college.

“I just fell in love with teaching, even back then,” Cakouros said. “I think I just knew I was always a teacher. I think teaching is sacred, really sacred.”

When asked her favorite part of being an educator, Cakouros grinned and with no hesitation said that it is her students.

“I can’t even put it into words, they’re amazing,” Cakouros said. “It’s a very humbling experience to teach because when a light goes on in a student or when they feel like they’re opening up or you’re opening up in ways because of them, it’s just this incredible energy and communication that’s on all levels—mental, physical, emotional, spiritual.”

Cakouros was born in Pennsylvania to Greek parents, and this background has inspired her to learn, teach and perform in both ancient and modern Greek. She is visiting Greece beginning Sept. 12 for two weeks to study and train in Delphi.

“She’s really passionate about her work and her students,” said senior theatre major Taylor Vaughan. “Her students are her life.”

A current student of hers, Vaughan, 21, first met Cakouros last year when she was a student competitor in the Kennedy Center American College Theatre Festival [KCACTF], and Cakouros attended as a faculty mentor. Vaughan found her to be a great source of support.

“I remember when I got first runner-up, she was so happy,” Vaughan said. “She was telling me she believed in me from the start and was so supportive and sweet, and she’s so genuine about it, too.”

Cakouros’ approach to students includes being very engaged and compassionate. As she watches students perform monologues in her Acting III class, her eyes never leave the actor, even as she scribbles notes down, and a smile forms on her face during each performance. Seeing her students take risks is something she revels in.

“I want my classroom to be a safe place to be who you are,” Cakouros said. “There’s definitely boundaries, but it’s okay to fall, it’s okay to fail, as long as you’re in this supportive and constructive environment that is here for you and will help pick you up again.”

The caring and focused spirit Cakouros brings is something others readily recognize.

“She’s a professor who teaches because she wants to see you grow,” said Megan Aldrich, a former theatre student. “Essentially, that’s the kind of professor we all want—a teacher who will fight for you.”

Aldrich, 23, graduated with a bachelors in theatre from Sac State last May, and now works as Cakouros’ personal assistant and stage manager for her spring production.

“She is one of the sweetest, kindest people I’ve met in my entire life,” Aldrich said. “She’s just a really warm person. She’s structured but not overwhelming, so it doesn’t feel like working. It just feels like spending time with someone you really admire.”

In addition to her students, the faculty Cakouros works alongside recognizes the hardworking and enthusiastic environment she creates.

“I definitely see her positive influence in the department,” said theatre professor Michelle Felten, who, together with Cakouros, brought students to KCACTF last year. “She’s a fun-loving, upbeat personality. She’s very supportive of both students and faculty. It’s going to be a difficult hole to fill in the faculty, having her leave.”

Cakouros currently teaches her advanced acting students Greek styles, a class that has not been taught here before.

“I hope it will be carried on. There’s so much talent in this class; I’m excited,” Cakouros said. “We’re going to go to some interesting places, externally and internally.”

Along with teaching, Cakouros is working on her own one-woman production, “Unveiling the Soul”, which she is writing, directing and performing in. The show will run next semester.

Cakouros said she hopes her students continue to implement her lessons in their everyday lives long after she teaches them.

“To be a good actor, I think you have to have enormous compassion and kindness for one another because it is such a difficult craft,” Cakouros said. “I want them to understand how it’s such an honor to be a theatre artist. It is an honor to do that.”

If she can impart one lesson for her students to take away from her teaching, it is the hope they develop in their consideration of others and complexity as people. She wants them to feel they were sincerely supported in her classroom.

“If my students can leave my class and really feel like they were truly seen and truly heard during the semester,” Cakouros said, “I will feel like gold.”