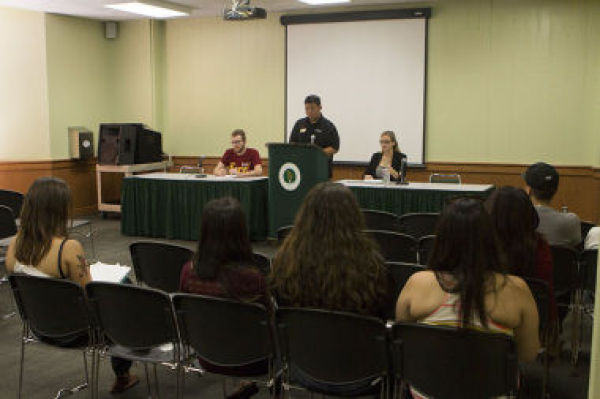 Approximately a dozen people attend the open forum Monday hosted by ASI, who are preparing for next week's elections.

As an active student and leader in several campus organizations and clubs, senior sociology major Eddie Triste first heard of the upcoming Associated Students Inc. election two days after they were announced and applications were closed.

Shocked and angry, Triste said he will not be voting as part of a potential campus boycott to protest ASI’s lack of publicity and failure to notify students about the election ahead of time.

“How can you hold you an election without having at least two people running for a position?” Triste said. “Especially since those positions, like the president, are running uncontested. I just think that’s undemocratic.”

With two vacant positions and 11 uncontested positions, including president and executive vice president, ASI candidates and representatives are concerned about the potential lack of voters in the upcoming elections on April 22 and 23.

Beth Lesen, who serves as the president’s designee on ASI’s Board of Directors, said there needs to be student representation to have a “finger on the pulse” of what their needs are, and to give students a real voice.

According to American Student Government Association, state universities across the United States had an average voter turnout between 10 and 15 percent.

With a 14.5 percent turnout  in 2013, the highest amount since 2004, Lesen said there may be less enthusiasm for the upcoming election since there are not as many candidate options.

“Ideally, having competition for the seats is preferable,” Lesen said. “For voter turnout, students are more inclined to show up to the polls on voting day when they have a choice and they want to make their choice known.”

Presidential candidate Lauren Lombardo said competition is especially beneficial when candidates are going to serve as the official voice of the student body.

“I know that a lot of students are aware of what ASI is and what ASI does,” Lombardo said. “Maybe they were less aware of how to get involved or didn’t exactly want to run for office. I hope it’s not because there wasn’t student engagement.”

With candidate forums scheduled through April 17, ASI allowed students to meet their potential representatives, and learn about their position and future plans.

While there was a scheduled question and answer session at the end, no student made had any comment, and the low-key event ended 40 minutes early.

If elected, Allain said he would strive for more participation and inform students about the importance of ASI.

“I just really want to inspire students,” Allain said. “Next year during candidate forums, I want to see this entire room filled.”

Under California Education Code 89300, state universities are allowed to establish a student government organization for the “purpose of providing essential activities closely related to, but not normally included as a part of, the regular instructional program.”

“It puts students at the table,” Tulane said. “It allows us to start making decisions that affect our college life, that affect future generations, while we’re here at Sac State. We don’t only want administrators to be the ones making those decisions because we are the ones that have to live with those decisions.”

Triste said the student population is detached from ASI, and the student government is hoarding their power to the point where no one knows about them.

“I don’t feel like I have enough choices,” Triste said. “It’s not a fair process. A candidate can show me something they want to do, but they don’t necessarily have to do it. Who’s going to run against them?”

Lesen said even though competition brings light to significant issues facing students, she is not worried because the current candidates are high-quality choices.

“Though I don’t think the lack of competition is going to damage the ultimate makeup of the board and its effectiveness, going forward competition for those seats does create a more robust process,” Lesen said. “It successfully engages more students in the voting experience. I hope in the future more students will consider running for office.”