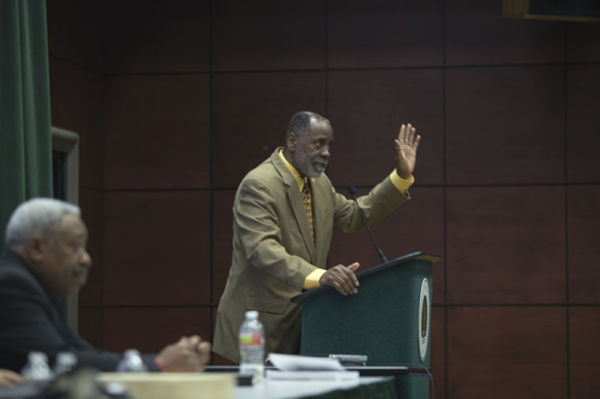 The Council for Affirmative Action panelist speakers called Sacramento State students to action April 3, demanding diversity amongst faculty in a forum presentation marking 60 years since the landmark case Brown v. Board of Education deemed separate but equal segregation in education as unconstitutional.

The forum presentation consisted of professors from different departments including: ethnic studies, government, criminal justice and Native American studies and discussed issues of equity, access to higher education and social justice that affect students today. It also highlighted activism efforts by students facing similar issues in the past and called students to action if they wanted change.

“We are reaching a very perilous moment right now,” said government professor Robert Oden in his introductory speech. “These programs are under attack, and the hiring of professors of color is dropping dramatically and students are asleep or busy doing other things to notice. Either one is unacceptable.”

Today, students are faced with the corporatization of universities, in which programs are scaled back to save money. Ethnic studies are among those areas being cut, said Cecil Canton, criminal justice professor and co-chair for the CSU Council for Affirmative Action.

A graduate from UC Davis in 1968, Oden participated in the student-led strikes organized as the Third World Liberation Front at San Francisco State University and UC Berkeley that successfully demanded the formation of ethnic studies programs within the university.

“These are events I remember and experienced because I was there as these events where going on,” Oden said.

African American, Asian American, Chicano and Native American students organized in 1968 and 1969 as the Third World Liberation Front, demanding the end of all forms of racism within UC Berkeley.

“The end of racism requires that specific people are proportionately represented in terms of faculty, administrators and specific numbers of admissions,” Oden said.

In retrospect, the students’ demands were met and brought about the creation of ethnic studies programs within universities, including the creation of the UC Davis Black Studies Department in 1970, which Oden said was his personal goal for his involvement.

“We won our fight,” Oden said. “Today UC Davis is one of the more progressive campuses around because we fought in 1968 and laid down the template for how you get these things to happen.”

The projected demographics in California for Chicanos and Latinos by 2020 is expected to be 41 percent of the population compared to 37 percent for Caucasian, 13 percent for Asian American and 9 percent for African American, according to the U.S. Census Bureau.

“Why should not this university be looking like that in 2020?” Oden said. “It is going backwards.”

Student panelist and sociology major Edgar Cruz talked about the need for more diversity among professors in the open discussion portion of the three-hour forum.

“I am paying to go to school here and I feel cheated because there are not professors here that look like me,” Cruz said.

Among the various issues that where discussed at the forum, the issue of diversity amongst faculty was prevalent.

Edward Jones, emeritus associate vice president for Student Affairs, encouraged the students to study history and said activism was the way to move forward in the current situation.

“If you don’t know your history, you are doomed to repeat it,” Jones said.