Sacramento State softball is fitted for the new season 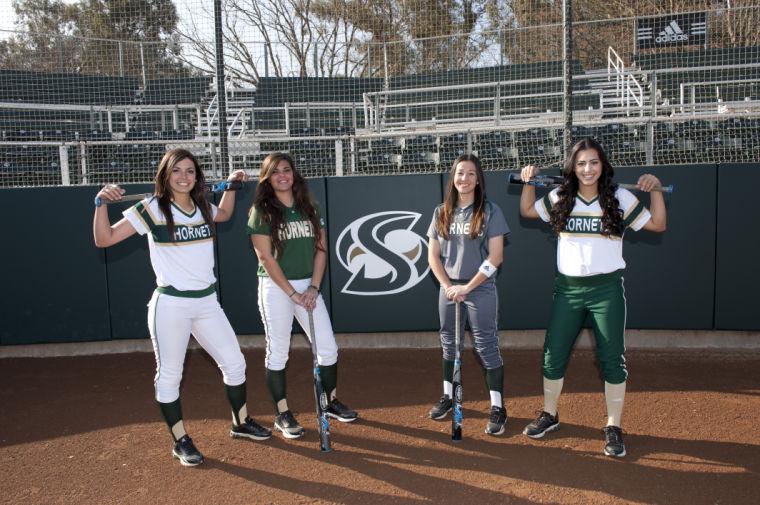 It was something that was set in place once new head coach Lori Perez took over as head coach after Kathy Strahan retired in June.

The renovated Shea Stadium will feature a new scoreboard, new dugout rail, backboard padding and windscreen, all of which will adorn the Hornet logo.

The outfield windscreen will also show the two retired jerseys of former Hornets that have worn the green and gold.

No. 17 Susie Bugliarello was a three-time all-American and had her number retired in 2005.

No. 3 Lindy Winkler later in the season on March 15 when the Hornets host CSU Bakersfield at home in a three-game series.

Winkler, played center field for four years at Sac State, was a consistent hitter in the 9 spot of the lineup for Strahan in 2006.

In her playing days, Winkler had a career long hitting streak of 11 and the Hornets was 8-4 with her in the anchor spot of the lineup, while Sac State was a measly 20-21 with her as the lead-off hitter.

First-year head coach Lori Perez said the backboard padding was in need of repair after last season because of the wear and tear it had throughout the years.

“The padding along the backstop and the railing was really 10 years old and needed to upgrade the padding badly,” Perez said.

Senior, pitcher Taylor Stroud has seen Shea Stadium get a total rehaul on the facilities, including the laser leveling of the infield dirt and the new padding and windscreen.

While Stroud is usually not facing the outfield windscreen, she said there is something else to look forward to when she pitches at home now.

“It’s awesome to see the facility getting better and better with the improvements that have been made,” Stroud said. “I think its easily the best field in Division I.”

Perez said it could not have been done without the help of the booster club help.

“John and Jackie Gabriels, were instrumental in funding for our new uniforms and with the money they gave money to our foundation to help pay for all of our equipment here,” Perez said.

The new jerseys are apart of the new style Adidas came out with last summer in both the College Softball World Series and Baseball World Series, including the retro uniforms similar to the 1980s Chicago White Sox, in which North Carolina State wore during last year’s world series.

The White Sox-like uniform will also have a variation of either white or green pants. Along with the retro uniform, there is a lead gray solid color uniform to offset the uniforms.

Perez said she wanted to give the team three uniforms to take to tournaments this season and to go away from last year’s button down top uniforms.

“Adidas presented me with their new styles and I wanted to bring a new look with the jerseys,” Perez said. “We haven’t have the lead colored jerseys since I played here and I wanted have a more traditional baseball look to the uniforms.”

Uniforms and stadiums have upgraded throughout the years. During the playing days of Perez, the uniforms were made for men so her uniform was often baggy on her and her teammates.

Perez likes the new style that Adidas has come out with for softball because of the female friendly design of the uniforms.

“The uniforms are longer and fit the girls better than what we had last year,” Perez said.

Sac State pitchers had a hard time with the old uniforms. After every other batter, pitchers, like Stroud who has a giant windup,had to re-tuck in the jerseys.

Stroud said the jerseys are not only comfortable but they are something she can look forward to wear during the season.

“Everyone is excited to get this new gear here at Sac State,” Marguilles said.