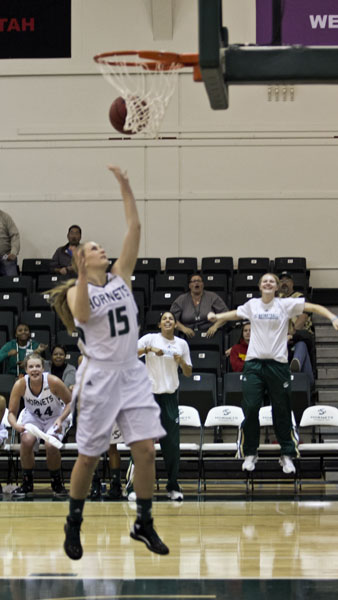 Sacramento State’s women’s basketball team had its 9-game winning streak snapped, Saturday afternoon with a loss to Southern Utah at The Nest.

Sac State head coach Bunky Harkleroad said his team did not play up to its standards and gave Southern Utah credit for disrupting the Hornets flow.

“We didn’t make shots, we didn’t rebound the basketball and did a horrible job of defending the rim,” Harkleroad said. “Southern Utah is a good basketball team. They out-coached and outplayed us. They deserve credit.”

The Hornets had a 42-35 lead at halftime, but struggled to maintain the momentum on defense, as the Thunderbirds outscored them 62-37 in the second half.

Southern Utah controlled the post, scoring 54 of its 97 points in the paint, while holding the Hornets to just 18 interior points.

“We didn’t really show up to play today like we should have,” Moreno said. “They outplayed us in every aspect of the game and I guess that’s what happens when that takes place.”

The Hornets’ 79 points is the lowest scoring total of the season. They scored 80 in a loss at Oregon State on Nov. 15.

The Thunderbirds had six players in double figures and were led by senior forward Marissa Robbins, who scored a game-high 16 points.

The Hornets will take their 3-1 road mark to Portland for a Jan. 16 showdown with Portland State. Tip-off is at 7 p.m.