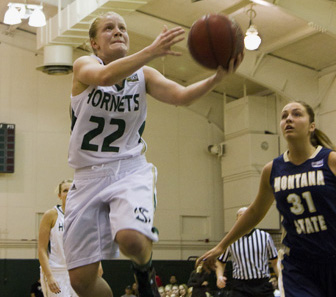 Moreno averaged 19 points, 5 rebounds and 2.5 assists per game in the Hornets’ season opening victories. She shot a combined 55.6 percent from the floor, including 60 percent from 3-point range.

Moreno was honored by the acknowledgement but it’s not her focus to garner individual accolades in her last season at Sac State.

“It feels great, but the most important thing was getting the two wins,” Moreno said. “I know that I have to give everything I’ve got this year, so I want it to be as good as possible with the whole team.”

Head coach Bunky Harkleroad was exuberant in his praise for Moreno.

“It’s a great honor for [Moreno] and I’m super proud of her,” Harkleroad said. “She has played with such confidence and poise and has a great energy level. It is what you want your leaders to do.”